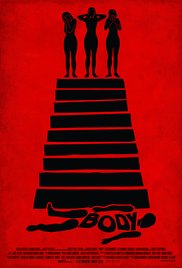 A low budget horror/thriller that starts off pretty well.

As the opening credits roll, the film screen is all black and a voice, barely decipherable, is calling 911 for help.

When the film opens, three girls, Mel (Lauren Molina), Holly (Helen Rogers) and Cali (Alexandra Turshen) party it up at Mel’s house. They start off with Scrabble arguing about certain words used before Mel’s dad interrupts bringing in food. The three exit the house to smoke weed with Mel’s younger brother Josh only to be caught by Mel’s mother. These kind of goings-on are nothing special but can happen all the time when everyone was a teen or later on when becoming one. Thus, everyone can relate to the incidents and this is the reason the film is so engaging at first. Directors Beck and Olsen do more than the normal slasher movie in investing their time on the three characters and the character development. They party hard, and it is entertaining to see them just do nothing but film themselves on their cell phones, for example dancing around.

But things take a turn when the trio decide to party into the night and visit Cali’s uncle’s mansion. But Cali is lying and it turns out that she used to babysit for the Asian family that lives in the house. Things turn sour when the groundskeeper suddenly shows up and is accidentally pushed down the stairs. The film turns into a slasher thriller.

Though not an exceptional film, BODY does possess certain unique traits not found in other films of this genre. First and most noticeable is the amount of effort put into the development of the character of each girl. Cali is the nasty one, Holly the decent rational one while Mel is the in-betweener. The character of Holly also undergoes a transformation that makes her character more complex. Hers is obviously the most interesting of the three. The character development is not there for show but also integral to the film’s plot. The next thing is that BODY is more of a thriller than a horror movie. There is no slasher that never dies or one that keeps appearing after being killed. Thirdly, there is a good transition from humour to thriller. The first half of the film is mostly the girls partying, which brings the film its lighter moments and a few laugh-out loud parts. There are a few psychological moments such as the ones with a girl screaming into the face of another that evokes horror.

The cast of unknowns deliver their performances naturally. They look like genuine teenagers out for a good time with just things getting bad.

But judging from Cali’s bad behaviour and personality one does wonder the reason the other two hang around or keep her as a friend. However, these are little points that usually go unnoticed in a teen thriller.

The film also briefly deals with conscience and consequences but it is not a message
film. BODY ends up a satisfactory time-waster and a good film to watch with a bunch of friends on a night out or at home. The film also opens on VOD Apr 26.