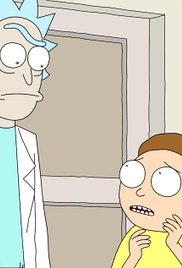 Rick and Jerry go on an adventure.

As predicted, Beth is visibly struggling with both being single and single parenthood. Her morbid horse hoof statue is indicative that Beth is not thriving in her post-Jerry world. Much like Seinfeld’s Festivus holiday, this season’s seems to be centered around the notion of the Airing of Grievances. Rick finally
gets the chance to directly confront Jerry about “ruining” Beth’s shot at a good future by knocking her up in high school.

As much as I’m loving every episode being a (sometimes literal) therapy session for our characters, using a mid-battle heart-to-heart as the backbone of every episode is getting a little old.

Despite the episode being focused primarily on Jerry and Rick, the understated star of the episode was Morty. We learn that Morty is the mastermind behind the whole premise of the Rick and Jerry episode just because Morty wanted Rick to get off his back for a minute. Morty’s confrontation of Ethan was downright sinister. We’ve seen Morty transform this season from an unwilling and helpless sidekick to a powerful protagonist.

The real question is: what is Morty going to do in future episodes with his newfound power and prowess?