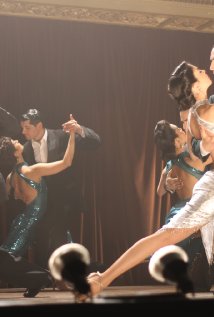 This documentary tells the story of love between the two most famous dancers in tango’s history – María Nieves Rego (aged 81) and Juan Carlos Copes (aged 84).

When the film begins, a closeup of Maria has her say that if she was given the chance to do it all again, she would not change a thing – for tango. The only thing is to do it without Juan. The camera moves back to show Maria and Juan standing very close, face to face. They begin to tango. This is a powerful start. Why did Maria make that statement about Juan. Did she bare that much hatred fro him? Or did she love him too much that she cannot handle it? The doc goes on to reveal the reason.

The film would naturally have a slow feel with two aged subjects. Director Kral (who got his film experience working as assistant to Wim Wenders) tries to counteract this by animating his film as much as possible. This is most evident in one scene where Maria’s two interviewers more than act out their surprise at Maria’s answers to their questions.

OUR LAST TANGO is less a film about the tango than about the relationship between Marian and Juan. And it is not a love but more a hate relationship. It becomes a bit tedious, with each complaining about the other, from start to finish of the film. Director Kral offers two sides of the story, so that the audience takes no sides. Often each would complain about the other at great length. Maria loves Juan too much but not unconditionally. Her pride is terribly broken she Juan bears a child with another woman. On the other hand, one can sympathize with Juan when he says he cannot stand Maria. It is not easy to live with someone whom one cannot stand despite the fact that that someone loves you.

The film has quite a lot of tango dances but not many shown in great detail or to great length. Rather many different types are shown during the different stages of their lives. The duo exported their dance to Broadway with ‘Tango Argentino’.

One wishes that there be more archive footage of Maria and Juan dancing together. Young dancers perform too many re-enactments so the film has too much of a made-up feel.
There is little said in the film of how the two became so famous and how rich or successful they became. Their dances on display in the film reveal very little of their talent as well.

OUR LAST TANGO is also a film about ageing, though not much is said of the subject. But one can see on the faces of both Juan and Maria – their past glories and regrets. Maria is also suffering from some nerve problem, evident in her old age. She cannot stop shaking her head.

It is difficult to imagine OUR LAST TANGO being interesting to those with little to do with dance, for the love/hate relationship of the couple is also not something that audiences will flock to.