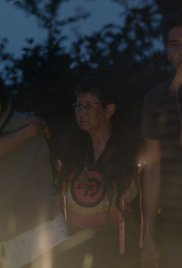 Calgary born Cree-Metis filmmaker Adam Garnet Jones’ first full length feature (he has made a few shorts) begins with a teen suicide in a First Nations community. Her brother, Shane (Andrew Martin), a young Anishinaabe man is at a crossroads at to whether to start school in Toronto or stay in the Reservation after the family comes across some inheritance money. But the family also needs the money for the family house which is in shambles, as seen by a pail collecting water from a leaking roof, at different points in the film. Shane has a girlfriend who wishes to leave with him, but Shane has a gay relationship with David (Harley Legarde-Beacham), the grandson of the community’s leader. Short of cash, Shane tries peddling drugs.

The film is a universal story about youthful dreams confined by reality, set in a remote Aboriginal community and the first LGBTQ drama by an Indigenous, two-spirited filmmaker in Canada.

Despite director Jones’ sincerity, the film is crushed by the weight of the manifold issues it tries to address – teen suicide, small town captivity, drug use, teen angst, gay love, son/mother relationship, native tradition, familial duty and perhaps a few more I might have missed. (They come so fast!) The significance of the title FIRE SONG will become apparent when you see the movie.

When a man has both a girlfriend and a gay lover, it is only a matter of time before the girlfriend finds out. And David faces this confrontation in one of the film’s better scenes.

Performances from the cast of unknowns are fair at best. The gay scene with Shane and David is nothing short of embarrassing. In fact, it is the most unrealistic gay scene I have ever seen in a movie – the two lovers just sit next to each other looking lost as to what to do next. So, finally mother decides to sell the property for the son to go to school. She should have done that long ago and saved every one so much trouble!

But FIRE SONG has played at various festivals including the Toronto and Vancouver International Film Festivals. It is also the Winner of the Air Canada Audience Choice Award at the ImagineNATIVE festival and the Winner of the Best Feature Narrative at the Reel Out Festival. Am I the only one who dislikes this film?