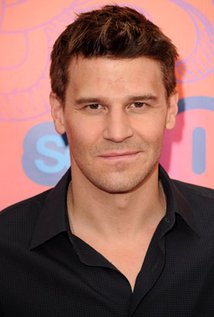 [on missing Sarah Michelle Gellar] “I loved working with Sarah… Sarah is great. A great person. Without Sarah I wouldn’t be standing here right now. So I owe her a lot.”

[From Late Show with David Letterman (1993) on his view on L.A.] “I see L.A. as a beautiful blonde with dirty underwear”

“I’d have to say, I can share Cordelia’s pain”.

[on appearing as Angel in the very last Buffy the Vampire Slayer (1997) episode:] “I pretty much slid right back in. It was another day of work. I’m not big with reunions, but it was fine.”

[on his divorce from Ingrid Quinn:] It was great at first, but soon became a real burden. Ingrid found it tough to cope with the fact that all of a sudden I’d become public property as opposed to her husband. [June 9, 2003]

[When told that Amy Acker told a reporter that he sometimes flashes his fellow stars:] “Yeah, I pull my trousers down in the middle of a serious take to see if they can keep a straight face. I need to lighten the moment, I guess.”

[on hearing that The WB, which canceled the series, has offered to return to Angel (1999) with occasional TV movies or a miniseries] “As far as returning to the show for a reunion, I could probably put that to bed now: I have no interest in doing that. It would have to be a bigger challenge, rather than going back to something.” (May 13, 2004)

[on being cast in Bones (2005)] I have love and admiration for what I’ve done in the past, but I’m looking forward to playing this character, Seeley Booth. He’s a simple guy on the outside – a cheeseburger and black cup of coffee guy. Inside, he’s conflicted. (September 13, 2005)