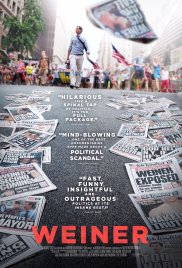 WEINER is the documentary of the rise and fall and rise and again fall of young congressman, Anthony Weiner. His final run for mayor of New York City forms the gist of the film though it ends with his complete defeat.

Weiner’s (his name made fun of, throughout his sex scandal) downfalls (twice) are due to his uncontrollable sex urges. He posted pics of him self in underwear as well as engaged in telephone sex. Weiner was caught once causing him to finally resign from his post as congressman. He was largely forgiven as he ran his campaign for mayor, with wife, Huma (she is Arabic) by his side. Huma forgives him. But his phone sex is again discovered and his fans were reluctant to forgive him a second time. The media, obviously has a field day.

But who really wants to watch a not so well known politician fail because of a sex scandal? There are more pressing topics in the world such as ISIS attacks and environmental issues. But directors Josh Kriegman (who also served as cinematographer) and Elyse Steinberg keep their film a fascinating and absorbing watch. Part of this is due to Weiner granting them almost full access in filming both his private and political life. Some of these segments, particularly the ones dealing with his wife and aide reactions are almost unbearable to watch. But it is these issues and the life lessons demonstrated that lift this doc above the average.

One is the side story of Huma, the long-suffering wife who has to stand by her husband for better or for worse. If the story sounds similar to what Hilary Clinton went through, Huma is at present one of Hilary’s top aides in her campaign. Though the husband was caught only sex texting or sex phoning and not having actual sex, it is the humiliation that gets the better of Huma – especially when Weiner commits the sex thing the second time.

Well, the people did forgive Weiner the first time as evident by the booing whenever Weiner’s politicians bring up the scandal in their speeches. But people were not forgiving the second time. This sociological behaviour also makes the film completely compelling.

The directors create suspense with captions like day 2 before election day; day of election day; using the countdown to the film’s effect. The camerawork is top notch, as evident in the segment in which one crew of cameramen follow Weiner and wife as they escape from their pursuers while the other trail the pursuers. This segment has the thrill like a chase in an action film.

WEINER succeeds as an absorbing documentary about betrayal and its sad effects. There are clearly no winners.