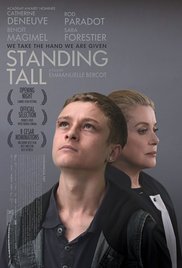 LA TETE HAUTE follows, for a large portion, the same filming style as the Cannes winner Laurent Cantet’s ENTRE LES MURS (THE CLASSROOM) and the more recent Stephanie Brize’s LA LOI Du MARCHE (MEASURE OF A MAN). All three turn out to be fascinating films, real life dramas suited to this kind of filming technique. The filming often has the camera stationed in a set-up in which a confrontation occurs. The actors have their role plays and they go at it, ensemble-style. The result is a compelling watch, with a more realistic feel as the scene looks totally unscripted, though it may not be. The camera focuses primarily on the actors, often with closeups on the reactions of dialogue that take place. The Dardenne Brothers attain an identical realism with a different technique, often placing the camera at neck level of the actors and following them closely around. LA TETE HAUTE occasionally feels like a Dardennes film since the protagonist is a kid, as kids are frequently the subjects in a Dardennes film. It would to be surprising if Bercot herself got some inspiration from Dardennes’ LE FILS another film about a delinquent boy.

Bercot allows the audience to root for the hot-tempered delinquent called Malony(Rod Paradot). Who would not like to see someone progress through the system and improve to be a functional citizen? But Bercot shows that the process is long and difficult but not impossible. Bercot (who co-wrote the script) attributes more effort by those helping the boy than put in by the boy himself. As the adage goes: “It takes a village to rear a child.”

Besides the boy, the supporting characters are all equally interesting. The mother, who is herself a delinquent, loses her two younger boys to social services. The boy’s councillor was himself a delinquent, younger on and got this job believing in the system. And there is the judge, magnificently played by Deneuve with all her regality. The scene in which she stretches out her hand to the boy in both desperation and sympathy is the film’s most touching moment.

But director Bercot takes her film one step further. She inserts more incidents than are normally found in a family drama. Included is a car crash, expertly shot and a home abduction.

There is much change the boy goes through, but these changes must be observed by the viewer. Malony is shown for once in a very vulnerable state crying for his mother when placed in prison for the first time. The way he holds the pencil to sign his name at the judge’s office shows progress from the way he held a pen with his fist at the start of the film. It can also be observed that most of the characters, the councillor and judge are also victims of the system. They have to work the system, just like the boy to each’s own advantage. There is much to be observed and learnt from Bercot’s film. That is what makes it so outstanding. It is a film about life and hardship – and how everyone faces his or her own at one time or another.

It is seldom that we get good French films these days. Cinefranco is gone. The number of French films that are commercially released has been reduced. This winner, that was chosen to open Cannes this year (the last time a French film opened Cannes was in 2005, Dominik Moll’s LEMMING that never got released here). It is a surprise and indeed good news that LA TETE HAUTE is released and before TIFF. The film comes highly recommended.