Based on real life on the suicide of Christine Chubbuck (Rebecca Hall) a Sarasota (Florida) news reporter, this realistic but grim account of events leading to her death is a hard watch. “If it bleeds, it leads.” – is is the newsroom’s unofficial motto for successful news ratings.

What begins as an ordinary person’s struggle for recognition leads to her downfall after many failures. Director Campos also shows failures in Christine’s personal life with her inability to get a date, her lost love with anchorman, George (Michael C. Hall), her virginity and her relationship with her mother, Peggy.

It turns out that she lets out all her troubles to work, finally coming head to head with her boss, Michael (Tracy Letts, delivering another winning performance after playing the Dean in INDIGNATION). Hall delivers a knock-out performance especially in the confrontation segment with Letts. Credit also should be given to the creation of the outstanding period atmosphere of the 70’s.

But one does go away with the feeling that the film has been over-dramatized in an otherwise humourless film. It would be interesting also to watch the documentary on Christine Chubbuck called KATE DOES CHRISTINE, also released this year. 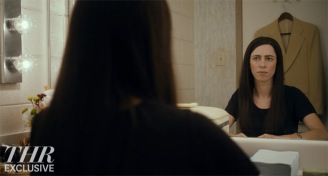