The new Dreamworks animation released by 20th Century Fox, TROLLS is a happy enough 3D computer-animated musical buddy comedy film based on the dolls of the same name created by Dane Thomas Dam way back in 1959.
The TROLLS are colourful figurine-sized doll characters who are known to be happy all the time. They sing, dance and hug constantly. But the happiness is now under threat as creatures known as Bergens have discovered the trolls and eating them up. They do so in order to be happy as Bergens do not know how to dance or sing or be happy. The name Bergens is likely derived from the coastal city of Bergen in Norway, the only country in the world known for trolls.

Many animated features share the identical premise (ZOOTOPIA, for example) of heroes saving their village. In TROLLS, the plot revolves around two trolls on a quest to save their village.

Princess Poppy (Anna Kendrick), throws a big party to celebrate one trolls’ escape from the Bergens, despite the fears and warnings of the glum and paranoid troll Branch (Justin Timberlake) that loud parties will attract them again. Branch’s fears are realized when indeed the banished Bergen Chef sees the fireworks and captures a number of trolls. Poppy is among the trolls who manages to hide, but discovers that none of the other trolls dares to venture to the town of the Bergens to rescue their friends. She and the reluctant Branch together journey to the Bergen’s town to rescue their friends.

The Bergens also have interesting characters. The scullery maid Bridget (Zooey Deschanel) strikes a deal with the trolls.: if she frees their friends, they will help her get a date with the now King Gristle Jr. (Christopher Mintz-Plasse). A plot twist involves the Zen-like troll Creek (Russell Brand) who after being apparently swallowed by the young king has been discovered being held captive in the jewel that decorates the king’s mantle. But things obviously work out in the very end, with as expected a happy ending that cannot be happy enough.

TROLLS is definitely a kid’s movie. The only scary part involves a troll eaten by a Bergen, but thankfully there is minimally done with little troll gulped down. The jokes are goofy enough for both adults and children to enjoy. TROLLS is not as funny as SHREK but the humour is at least funnier than the average animated feature.

TROLLS is also part musical. Most of the songs are popular pop songs that suit the atmosphere of the film. Of all the voice characterizations, John Cleese’s and James Corden’s are immediately recognizable. The film is super colourful. It helps too that the animated choreography is inventive enough to be entertaining as well as good silly.

As in most animated feature these days, TROLLS arrives in 3D. It answer the question whether audience can or cannot do do with too much happiness. 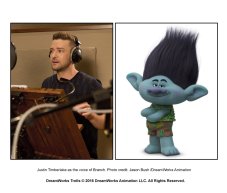