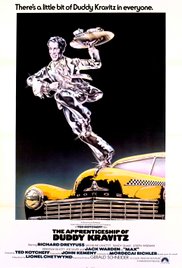 It has been a long spell (thanks to its recent restoration) since the Canadian classic THE APPRENTICESHIP OF DUDDY KRAVITZ got a release again on the big screen. The film is the autobiography of the author, Mordecai Richler based on his best selling novel of the same name.

The film is the story of Duddy (pronounced doo-dee) Kravitz (Richard Dreyfuss), a brash, restless young Jewish man growing up poor in Montreal, Canada. His taxi driver father Max (Jack Warden) and his rich uncle Benjy (Joseph Wiseman) are very proud of Duddy’s older brother Lenny, whom Benjy is putting through medical school. Only his grandfather (Zvee shows the motherless Duddy any attention. But Duddy rises the ranks.

There is a scene in which an old Jewish bearded man says that a man without land is a nobody. (This scene is seen in both this film and the Woody Allen comedy LOVE AND DEATH). In this film, it is Duddy’s grandfather who tells his grandson the maxim.

Duddy starts a serious relationship with a hotel employee, French-Canadian Yvette (Micheline Lanctôt). One day, she takes him on a picnic beside a lake. Duddy is stunned by the beauty of the setting, and his ambition crystallizes: taking to heart his grandfather Zeyta’s maxim “a man without land is nobody” to heart. The film traces Duddy’s accomplishment, but not without dire consequences. It is a film of both coming-of-age and growing up – and a very effective one at that.

This is director Ted Kotcheff’s best film. His attention to detail, which is evident throughout the film is what makes the movie tick. The best example can be seen in the opening sequence where Duddy in military garb marches in a band while goofing around. The military tune “O When the Saints” bookmarks the ilm, while the lyrics also have some meaning in the story.

It is reported that Richard Dreyfuss hated his performance so much in this film that after seeing the film’s final cut, he decided to take the role in JAWS, that he initially turned down. But in my opinion, Dreyfuss delivers an almost flawless performance as Duddy in the film . He captures the juvenility and ambition of the growing Jewish boy. Dreyfuss has proven himself as an actor in the the later AMERICAN GRAFFITI and also in THE GOODBYE GIRL winning an Oscar for Best Actor in the process.

I have a few complaints of the film despite it being a classic. Being a film set in Montreal, I would prefer it being shot in France or at least have more French spoken in the film. The other is the list of Americans playing Canadians and an Englishman playing the American Hollywood director.

The Apprenticeship of Duddy Kravitz screens as part of Canada on Screen on Sunday, February 5 at 6:30 p.m. Beginning in January and running throughout the year, this free programme will present moving-image installations, special events and guests, an extensive online catalogue, and screenings across the country, all based on a list of 150 essential moving-image works from Canada’s history, and compiled through a national poll of industry professionals. Canada on Screen is a co-production between TIFF and three core project partners — Library and Archives Canada, the Cinémathèque québécoise, and The Cinematheque in Vancouver — for Canada’s sesquicentennial in 2017. The Government of Canada and RBC are Presenting Partners of Canada on Screen.

One thought on “Film Review: THE APPRENTICESHIP OF DUDDY KRAVITZ (Canada 1974) ****”