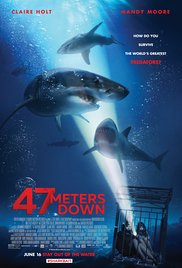 Two sisters vacationing in Mexico are trapped in a shark cage at the bottom of the ocean. With less than an hour of oxygen left and great white sharks circling nearby, they must fight to survive.

47 METRES DOWN, directed by Johannes Roberts and written by Roberts and Ernest Riera is a British horror thriller adventure about two sisters stuck in a shark cage 47 metres under the sea. There is nothing British about the film that can be noticed. The lead actor, Mandy Moore is American and her sister is played by Australian Claire Holt losing her Aussie accent. The only hint at British is the film’s title or it would be called 47 (or the equivalent in conversion) Feet Down.

The story follows sisters Lisa (Moore) and Kate (Holt) on vacation in Mexico. Lisa’s boyfriend has broken up with her because “she made the relationship boring”. While drinking and dancing at 1:00 a.m, they meet up with some local men who tell them about cage diving with sharks. Lisa is reluctant but Kate convinces her to come along. The men arrive and talk to Captain Taylor (Matthew Modine). The girls follow and both lie about being experienced divers even though only Kate knows how to dive. While under water, the winch breaks and the cage plummets below. Their oxygen slowly runs out while they fight against time and the sharks to be rescued with a spare winch.

Moore and Holt keep their characters in focus – balancing humour and terror. Matthew Modine, now in his fifties, still looks charming as Captain Taylor.
Roberts keeps his film exciting from start to finish with a solid pace that never lets up. The first time the full body of a shark is seen is when it suddenly appears a third through the film, swallowing the camera the girl dropped from the cage. The ending contains a twist that will surprise. The film is never short of scary set-ups. After the broken winch is fixed, the rope breaks. Roberts also knows how scary it can be in a dark scary sea where one cannot see the light from the surface or the ocean floor. Being lost underwater is much scarier than being lost in space. The film’s best and scariest scene is Kate swimming with a flashlight in the dark waters with nothing in sight but darkness.

The lean script omits details. Nothing is known of the sisters’ background, where they work or which American city they come from, except for mention of Lisa’s never seen boyfriend.

Why would two girls want to under extreme danger in a shark cage? The script spends time explaining the reason. One is that Lisa needs to prove to herself that she is not as boring as her boyfriend. The second is Kate insisting that they have a good time together and the third is the attraction of seeing sharks up close. The fascination is heightened in a scene where sharks go on a feeding frenzy devouring a bucket full of bloody fish parts.

The film is sufficiently cheesy to be fun. The skimpy costumes, the stereotyped locals and the clear ocean waters and white beaches are what can be expected
On the business side, the $5 million lean production has already grossed more than $13 million after the first week of release.