Skip to content
HomePosts tagged 'Alicia Vikander'
Filmmakers travel to six continents and 20 countries to document the impact humans have made on the planet.

ANTHROPOCENE – the current proposed geological epoch in which humans are the primary cause of permanent planetary change.

Filmmakers filmmakers Jennifer Baichwal and Nicholas de Pencier return with their latest and third of their trilogy after MANUFACTURED LANDSCAPES and WATERMARK, entitled ANTHROPOCENE: THE HUMAN EPOCH.  The doc, written by Baichwal and narrated by Swedish actress and Oscar winner Alicia Vikander is a disturbing doc that demands to be seen for it explores human’s impact on the Earth.  The term for this impact is terraframing – the resurfacing of land due to human needs.

Scientists believe that human beings have left the Holocene epoch (which started 11,700 years ago when the last ice age receded) and entered the Anthropocene (because humans

now change the earth and its systems more than all other processes combined).  The film examines this awful age where the planet is altered for its worst.

Baichwal’s films are always stunning to look at, even when displaying the ugliness of the earth.  This is most evident with the landfill segment where the entire screen is composed to human garbage.  One can only imagine the stench of the place.

The film’s first scene is that of molten metal  The site on display is north of the Arctic Circle in what Baischwal describes as Russia’s most polluted city.  This is where the world’s largest metal smelting industry is located.

Baichwal and her crew travel the world documenting evidence of human domination – from concrete seawalls that cover 60% of China’s mainland coast, to psychedelic potash mines in Russia’s Ural Mountains, to vast marble quarries in Italy, to surreal phosphate tailings ponds in Florida.  In each country, the voiceover is in the country’s languages (in English, Russian, Italian, German, Mandarin and Cantonese with English subtitles) so as to add to the segments’ authenticity.

Baichwal’s film provides a bit of distraction in the form of the segment on extinction.  She shows as well as educates on the extremely endangered species including the white cheek gibbon, the white rhinoceros, the Egyptian tortoise, the chicken frog and the okapi.  I never knew what a okapi was till now.

Baichwal does not provide solutions to the problems nor offers much hope to the saving of the planet.  Perhaps she hopes this document on film might serve the purpose.

Still, ANTHROPOCENE: THE HUMAN EPOCH is a spectacular film – Baichwal’s best of her trilogy.  She has spent an immense amount of time on research and travels resulting in this magnificent educational documentary.

The film is part of The Anthropocene Project that also comprises complementary exhibitions premiering simultaneously on September 28 at the Art Gallery of Ontario and National Gallery of Canada, new Burtynsky photographs, new film installations by Baichwal and de Pencier, experiences in augmented and virtual reality, a book published by Steidl, and education program.

Filmmakers filmmakers Jennifer Baichwal and Nicholas de Pencier return with their latest and third of their trilogy after MANUFACTURED LANDSCAPES and WATERMARK, entitled ANTHROPOCENE: THE HUMAN EPOCH.

The doc, written by Baichwal and narrated by Swedish actress and Oscar winner Alicia Vikander is a disturbing doc that demands to be seen for it explores human impact on the Earth.  The film’s first scene is that of molten metal.

The site on display is north of the Arctic circle in what Baischwal describes as Russia’s most polluted city.  This is where the world’s largest metal smelting industry is located.  Baichwal and her crew travel the world documenting evidence of human domination – from concrete seawalls that cover 60% of China’s mainland coast, to psychedelic potash mines in Russia’s Ural Mountains, to vast marble quarries in Italy, to surreal phosphate tailings ponds in Florida.

ANTHROPOCENE: THE HUMAN EPOCH is a spectacular film – Baichwal’s best of her trilogy.  She has spent an immense amount of time on research and travels resulting in this magnificent educational documentary.

Lara Croft, the fiercely independent daughter of a missing adventurer, must push herself beyond her limits when she finds herself on the island where her father disappeared.

Tomb Raider is the new 2018 action-adventure re-boot film directed by Roar Uthaug and written by Geneva Robertson-Dworet and Alastair Siddons, from a story by Evan Daugherty and Robertson-Dworet.  It is based on the 2013 video game (beware of films based on video games!!) of the same name, with some elements of its sequel by Crystal Dynamics.  There is evidently more plot and story in tho re-boot, making Lara Croft more human than in the previous Angelina Jolie LARA CROFT TOMB RAIDER films.

The plot involves Sir Richard Croft (Dominic West) on some silly mission of finding some Queen of Japan’s tomb in some island off Japan.  He disappears after giving all his love to his little daughter, Lara.  Lara (Alicia Vikander) grows up and searches for him on the island with the help of a Hong Kong boat captain (the delicious looking Hong Kong star Daniel Wu).  She encounters the villain (Walter Goggins) and learns that daddy is alive.  And the plot thickens right up to a promised sequel.

The film contains many loose ends and ridiculous set-ups.  For one, why and how the father placed all these clues (example: the first letter in my last destination) while undergoing his tremendous task is questionable.  After father and daughter are re-united in a cave, the next scene has Lara Croft armed with a bow and 6 arrows in the quiver attacking the enemy camp single-handedly.  Where did she get the weaponry from?  After killing 6 or so, there are still 6 arrows in the quiver.

Lara Croft is the super heroine that never dies and can solve a dozen puzzles, even if they are never explained satisfactorily to the audience.  The trouble with a super heroine is that the audience knows she can never die, and so there is never any real suspense in the action scenes.  The action set-ups are all great too look at though, and watching the film in IMAX makes all the action grander but also quite ridiculous.

The film, though running at a length of almost 2 hours gets boring after 30 minutes.  The elaborate story creates more boredom that interest.  Dialogue runs from cliched (traps are made to keep people in; not people out) to the ridiculous (all myths have their foundations in reality.)

Uthaug and his crew including the actors try too hard to make the film work.  The result is a film too serious in intentions such as saving the world at all costs resulting in a plot so convoluted that it turns out confusing and unbelievable.  The film also ensures that a sequel is necessary to continue the story.

The production budget is $94 million but there are well orchestrated action pieces like the shipwreck segment.

Sisters in conflict travelling through Europe toward a mystery destination.

When sisters Ines (Alicia Vikander) and Emile (Eva Green) are greeted at an institution (for the dying) with the standing figure of Charlotte Rampling wearing an overall, one can immediately tell what will happen is not going to be good. Ines is about to die of cancer and she wants to find closure with her sister as to the past.

EUPHORIA marks the English-language debut of Sweden’s Lisa Langseth and it is simply terrible. This is new age stuff that many will just gawk at.

The written dialogue is also plain awful. The kind of words Emile uses, the swearing and all is also used by Ines’ character. The words or ideas of different characters should be distinct. The film could do with a bit of humour – as dealing with death is a topic ripe for some black humour. Whenever Ines coerces Emile to talk about an incident in the past, she will later use that against her and lose it.

If Emile could not see this coming, the audience certainly can, for the script is too predictably cliched. Charles Dance puts a bit of life into the film as a dying man who organizes his own farewell party. The film turns out to be a muddled look on death mortality. 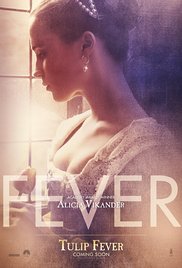 An artist falls for a young married woman while he’s commissioned to paint her portrait during the Tulip mania of 17th century Amsterdam.

The press is having a field day with the news of the new film TULIP FEVER based on a scandalous affair set in 17th Century Amsterdam. When the film critics were asked to sign an embargo for their reviews to appear no earlier that 1 pm of Friday, the film’s opening day, something must be afloat. The film was expiated to be awful. In addition, rumours were going around that TULIP EVER had been siting on the shelves for 3 years.

To be fair to the film, the film was in production in 2014 and the film was scheduled for a 2016 release. So, the film was on the shelf for a year and not 3. As for the embargo, the studios have their reasons. The film is not that bad, though it is not that good either. Despite the film’s flaws, it is quite watchable and pleasant viewing.

For one, the film has an impressive cast that includes Oscar Winner Judi Dench, hardly recognizable in cloister apparel. She is the Abbess who specializes in growing tulips. The film also stars rising start Alicia Vikander, Dane DeHaan, Jack O’Connell and Christoph Waltz. This is Waltz in his strangest role not as an antagonizer but as a victim of various plots. DeHaan, who has become quite the household name now with this third big expensive flop in a row after A CURE FOR WELLNESS (in turn quite a good film despite flopping at the box-office) and the same could be said for VALERIAN.

The film is told from the point of view and voiceover of a maid, Maria (Holly Grainger). She works hard for her mistress Sophia (Vikander) who was bought from the orphanage for a wealthy Cornelis (Waltz) who is desperate to have a son. Maria has an affair with a fishmonger (O’Connell) who delvers fish to the household. Sophia has an affair with a painter, Van Loos (DeHaan) behind Cornelis’ back. When Maria becomes pregnant ,s he blackmails her mistress as she knows of Sophia’s affair with Van Loos. Sophia decides to have Maria’s baby as her own to fool her husband. Complications arise in this complicated tale of deceit, with tulip truing brought into the picture.

It is are to market a film in which those who plot and have various affairs flourish and the poor faithful and believing husband doesn’t. He ends up, forgiving his transgressors and even grating them his residence.

The film is set in Holland, in the 17th century when tulips were the talk of the town. Business people were trading on tulips, very similar to the stock market at present. As expected, while many may make their fortunes, oner less fortunate ones stand to lose everything.

TULIP FEVER benefits from an interesting though hardly credible story. The period setting in Amsterdam helps too, despite the film shot totally in English with largely English and European actors. TULIP FEVER ends up an interesting failure. It costs only $25 million to make, so it might just make a little profit.

[The New York Times – February 9, 2016] During production of The Danish Girl (2015), the filmmakers were obsessed with me not looking Scandinavian and I was like, ‘I’m the only Scandinavian in the whole film.’ They paled my skin, to make me lighter. People say that I’m tanned, but that’s my natural color.