WHERE THE WILD THINGS ARE, 2009
Movie Reviews

Young, mischievous Max is sent to bed without his supper, but when his bedroom turns in to a magical jungle landscape filled with strange creatures, he embarks on a wild imaginary adventure.

I walked into this film knowing nothing. All I knew was Spike Jonze directed it and they were using the Arcade Fire song to promote it in the trailer. I also heard right before that this was based on a children’s book, but I never read it as a kid or adult.

So I saw this film with virgin eyes. And what I saw I was impressed with. This is a movie almost all of us can relate with because we’ve all been that kid who would rather live inside of our imagination than real life. And we’ve also been that adult too.

Where The Wild Things Are is a movie for everyone because this is a film about FEAR. We all have it and we all react differently to it. Our hero Max (played by 11 year old Max Records) is a young boy who is scared about his new surroundings. He’s alone and doesn’t really like it so he runs away inside of his own world.

What makes him alone is that his teacher is not aware that what he says carries a lot of weight with the children. And saying that the sun is dying might not be the best thing to say to a group of 10 year olds. His father is also gone and his mother is moving on with another man and Max doesn’t like it. And his sister is a teenager and is now living in that teenage girl world that most of them do.

So Max goes off into his own world. And when I was 10 years old I did the same thing. My own parents had their own issues and I had two older teenage sisters who were going through that stage. So in my basement I created my own world and I was the only member because it was just my imagination. And I’m sure there are millions of kids doing the same thing now.

Where The Wild Things Are gives us characters in the wilderness who are purely Max’s creation. And all of these characters are dealing with their own inner fears and loneliness. It’s like the 7 animals are all versions of his own personality. And every character just wants to find peace in their world.

But life isn’t always about peace and fun. The characters decide to create a fort where all their dreams can come true, they can always be together forever and their is a shield that doesn’t let in any fears. The fort seems to be working at first but then conflict occurs because everyone has a different idea of what happiness is.

And that’s the point of Where The Wilds Things Are. We all want to be happy and not alone all the time but sometimes a little conflict is needed in order for perspective to occur. And as we grow from kids to adults our version of happiness changes year to year. We can’t just live in a fort all the time even when you’re 10 years old. And for Max he needs to learn when it’s time to leave that fort and come back home to reality.

The most interesting character from Max’s imagination is Carol (voiced by James Gandolfini). He just wants things to remain the same all the time and when it doesn’t he doesn’t know how to handle it. His friend KW has found new friends and Carol is threatened by that because they are not what he’s familiar with. Just like how Max’s mother has a new boyfriend. Carol reacts in anger by damaging things he loves. Just like Max damages his sister’s Valentine’s present when she decides to hang around with her friends instead of him.

This is a highly fascinating movie that really deserves a second viewing because there is more than meets the eye. Max learns from his imaginary world just like an adult would by going to a therapist or writing a journal. And it’s all about how we deal with our FEARS. Something that isn’t taught for some reason in school.

Where The Wild Things Are crosses generations. A film a 5 year old can get something out of and also a 90 year old. And they said only Pixar is capable of that. 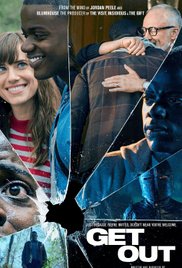 Imagine a horror version of GUESS WHO’S COMING TO DINNER with a director trained in comedy with an act at Second City, Chicago, and the result is the priceless horror comedy GET OUT that opens this weekend and the most fun at the movies so far this year.

Now that Chris Washington (British Daniel Kaluuya, SICARIO, JOHNNY ENGLISH REBORN) and his girlfriend, Rose (Allison Williams), have reached the meet-the-parents milestone of dating, she invites him for a weekend getaway upstate with Missy (Catherine Keener) and Dean (Bradley Whitford). At first, Chris reads the family’s overly accommodating behaviour as nervous attempts to deal with their daughter’s interracial relationship, but as the weekend progresses, a series of increasingly disturbing discoveries lead him to a truth that he could have never imagined.

First of all, there is the weird as hell maid, Georgina (Betty Gabriel) who has the uncanny ability to cry while laughing at the same time. Then there is the assortment of guests that show up, apparently for an annual event, all of whom treat Chris with the greets oddity. The best inspired character is the blind owner of an art gallery, Jim Hudson (Stephen Root).

Things take a turn for the worse when Missy hypnotizes Chris to strop smoking. Chis finds himself stuck in a void whenever Missy stirs tea in a tea cup, which is actually one of the scariest scenes in a horror movie this year – credit to director Jordan Peel.

Director Peel appears to figure that if he directs very act set-up to perfection, then the combination of all these acts would make a perfect movie. The tactic actually works. Each horror set up is devised with the greatest of both creepiness and campiness that delight the audience, judging from the laughter and scares of the audience at the promo screening.
Every actor performs his or her part to almost perfection. Peel appears to be able to elicit excellent performances from all. Catherine Keener is again a pleasure to watch, and I have never seen her in a bad film. She has the knack of picking the best films.

There are a few forgivable flaws in the script, which is also written by Peel. One is the careless placement of the red box, discovered by Chris revealing all of the family’s past victims. The box should have been kept under lock and key. The other is Dean performing the operation before the victim is wheeled into the operating room.

But the film is deliciously wicked, from the camp humour to the suspense to the sexual innuendo and racial connotations. The film is also brave enough to attempt a horror film in which a black man is the victim with a racial setting. (Director Jordan Peel is black.)

My favourite camp horror is Dario Argento’s OPERA. GET OUT marks a close second. Low budget but high in hilarity and entertainment. Highly recommended!