A priest of a small congregation in upstate New York grapples with mounting despair brought on by tragedy, worldly concerns and a tormented past.

FIRST REFORMED is the name of an old church built in 1767 that is still standing in the film of the same name.  The film’s subject is Reverend Toller (Ethan Hawke), a good-hearted God-fearing man but one who questions his faith after the death of his son, that also resulted in his marriage break-up.  Toller is lonely.  Toller is also ill with a cancerous tumour.

The film is directed by Paul Schrader, known for his serious films.  His best movies include BLUE COLLAR, CAT PEOPLE and AFFLICTION, the latter film winning James Coburn the Best Supporting Actor Oscar.  FIRST REFORMED shares a bit of the scarce but biting humour in AFFLICTION, in the form of Cedric the Entertainer playing the supporting role of Pastor Jeffers.  But Schrader is dead set on the subject at hand – the relevance of religion in today’s world.  Jeffers offers advice to Toller in  a sit-down session in his office: “You are always in the garden.  Jesus was never always in the garden.  He was sometimes at the market place or on the mountain.  He was never in the garden on his knees spitting blood.”   This is the film’s laugh-out loud yet serious segment.  Unlike the recent film DISOBEDIENCE with an Orthodox Jews setting, this film is respectful of its religious setting.

The story unfolds from the appearance of Mary (Amanda Seyfried).  She wants the reverend to speak to her husband, Michael (Philip Ettinger) who wants to destroy the child that Mary is now bearing.  This is when Toller reveals (to the husband and the audience) that he is a man with baggage himself.   His family have all been in the military. By tradition, his son follows by enlisting, against the wishes of his mother.  The son is killed 6 months later in Iraq.  Toller’s wife and him are now separated with Toller now serving in the church.   In mid-film, a tragedy occurs that Toller blames himself for, wondering what he could have done different.

Toller keeps a journal, writing by hand his thoughts and deeds every 24 hours.  The words serve two purposes.  Besides recounting the events that have occurred  stressing the importance of each, they also reflect the intimate thoughts of the writer, how he feels as he goes on, not only with the events but the daily routines.  Toller intends the diary be destroyed after a year of writing, done as an experiment, which makes the exercise all the more curious.

The Reverend Toller (age 46) is revealed to be a meticulous man from the very first scene.  He insists on fixing the leaking faucet in the men’s toilet on his own, without having to spend unnecessary money.  He can be an angry man an a timid one intimidated by those above him.

Toller is a character waiting to explode, just as the Coburn character exploded in Schrader’s best film since AFFLICTION.  Hawke delivers a dead serious performance, one of the best of his career.  These are just two reasons making FIRST REFORMED a worthwhile film to watch.

There are smart dumb comedies and there are dumb, dumb comedies. WHY HIM? directed and co-written by John Hamburg (who wrote MEET THE PARENTS, MEET THE FOCKERS and the ZOOLANDER movies) falls into the latter category. But all is forgiven for like the hit comedy DUMB AND DUMBER, WHY HIM? is quite funny.

As in MEET THE PARENTS and MEET THE FOCKERS, it is the story of the guy trying to impress his future in-laws. The hitch in WHY HIM? is that the guy is a weird monstrous hip games designer millionaire who swears in every sentence he utters. So will Laird (James Franco) be able to charm his future father-in-law Ned (Brian Cranston) so that he can give him permission to wed Stephanie (Zoey Deutch).

The audience is set up for an all-out gross film with the beginning scene where Laird is close to show Stephanie his almost black blue balls in a video chat. The scene shifts to Stephanie’s dad’s birthday celebration where she is video chatting him when Laird suddenly appears in the background and takes off his pants. There is nothing highly original about this comedic set-up but it still brings on the laughs.

Stephanie (Zoey Deutch) invites her father Ned Fleming (Bryan Cranston) and mother Barb (Megan Mullally), along with their 15-year old brother Scott (Griffin Gluck), to stay with her wealthy and famous boyfriend, Laird Mayhew while visiting her at Christmas. Laird’s vulgar, gregarious, and blunt personality is slightly overwhelming for Barb and Scott, but causes Ned to downright despise him. However, Stephanie insists that Laird is a nice person, and that he makes her happy. But when Laird reveals he plans to propose to Stephanie in only five days, the race to prove himself worthy of her love so Ned can give them his blessing begins. Laird goes out of his way to win over Barb and Scott, while Ned schemes to make sure Laird goes down in flames.

Where the film starts to slack is when it gets emotional with the different relationships (father/boyfriend; father/daughter and boyfriend/girlfriend). The ending 20 minutes drags too long and is a bit of a let down considering the fast pace of the rest of the film. There is a surprise appearance of a famous band at the end of the film. Still WHY HIM? succeeds as quite a hilarious though quite a dumb comedy. 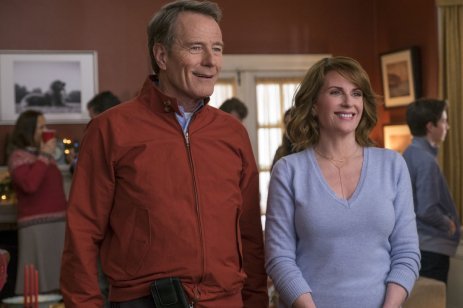 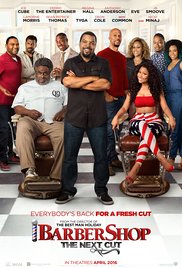 This time around, the all male barbershop has incorporated female hairdressers as well. This gives the script an excess to lots of verbal battle of the sexes – all mediated of course by Calvin. The ensemble cast has lots of comedic material here to show their stuff.

As there are many characters in the film, the film includes several parallel stories in the plot, all of seemingly equal importance.
The main one involves Calvin relationship with his coming-of-age son.

Calvin’s son is about to join a gang, obviously not realizing how fortunate he is tom have his parent’s love and care. Another tied-on plot addresses the violence of Chicago. Too many kids are killed everyday due to gang related crimes. The barbershop decides to do something about it by offering free weekend haircuts to create a ceasefire. Other subplots involve Rashad (Common) fooling around with Draya (Nicki Minaj) under the eyes of his suspicious wife. Calvin is also in the process of buying property north and to move his barbershop to a safer place. All these plots are loosely tied together and are intercut as if the director is a traffic cop.

The blend of drama and comedy does not mix well. Ice Cube appears to be in Tyler Perry mode, being too preachy and trying to be goody-two-shoes in the African American community.

It takes a full third of the film to get its footing. The first third clumsily re-introduces all the characters of the barbershop, most of whom the audience have forgotten as the last barbershop film was made about 10 years back. The last part gets too sentimental and preachy and all the good intentions appear a bit too much.

But the film contains a few good comedic set ups. When the film just lets the actors loose and do their thing, it generates the most laughs. One is Nicki Minaj shaking and showing off her booty. The bit where all the employees in the barbershop break out into an impromptu dance is extremely well done with Common stealing the show with his break-dancing. Cedric the Entertainer is always very funny and is the funniest barber in the shop. Ice Cube proves again he can do both serious and comedy.

But the film should cater more to African Americans. For others, the accent is a bit difficult to follow and a few jokes will go above the heads on non-black audiences. But BARBERSHOP fans should not be disappointed with this entry. The film is tagged to be number two this weekend following THE JUNGLE BOOK.