Denzel Washington stars as Roman Israel, a driven, idealistic defense attorney who, through a tumultuous series of events, finds himself in a crisis that leads to extreme action.

Writer/director Dan Gilroy’s ROMAN J. ISRAEL is a film that tries very hard to be perfect, just as its subject, ROMAN J. ISRAEL, ESQ (Denzel Washington) tries to be.  But perfection is a state that is almost impossible to achieve with regards to the film and its subject, and this point comes clear at the end of the film.  Which is a shame considering writer/director Gilroy’s noble intentions.

The film begins with a document in the making, with a plaintiff and defendant named the same person Roman J. Israel, Esq.  The film flashbacks three years earlier to explain how this state of affairs comes to be.

Gilroy introduces his man, Israel as a noble man, but one that is not respected by many as this is a man not of the world, but of humbler means but with proud aspirations.  He works in a small law firm with his partner taking on small cases that matter in terms of human rights and fairness.  The partner does all the court appearances while Israel all the ground work.  When his partner, the firm’s front man, has a heart attack, Israel suddenly takes on that role.  He finds out some unsettling things about what the crusading law firm has done that run afoul of his values of helping the poor and dispossessed, and he finds himself in an existential crisis that leads to extreme action.

Into the his world arrives two people that make a difference.  One is Maya (Carmen Ejogo) who looks up to him and who he eventually falls in love with.  The other is the head of a well established and successful law firm, Arthur (Colin Farrell) whom his partner taught and inspired in law school.  Arthur takes Israel in, hoping to find his conscience that he has almost lost in the world of business and law.

What stands out in this incredible story is Roman’s downfall.   Like any other man, he is tempted by the good life.  Roman takes a bite of the apple in the garden of Eden.  The apple arrives in the reward money Roman quietly takes from one of his cases.  And he is found out.

A lot of the film rests on Oscar Winner Denzel Washington’s performance.  Roman is the main subject who is in almost every scene.  Roman not only undergoes a character change once but twice from good to bad and to good again.  The character also undergoes a rites-of-passage where he learns about life itself.  But the surprise and prized performance comes from Colin Farrell.  Farrell douses his unkempt and portly appearance he donned in THE KILLING OF A SACRED DEER and THE LOBSTER to reveal a sexy business executive, a Mr. Perfect looking sharp and sexy in his  perfectly tailored suits and groomed hair.   He finally shows his transition from action actor to star commanding the screen presence in this film so magnificently.

One wishes ROMAN the film would have come out more powerful.  The main problem is the film aiming too high.  A classic movie arrives with minor flaws, some dull parts and surprises just as what life dishes out.  Gilroy’s ROMAN J. ISRAEL, entertaining though it may be, is just too meticulously planned. 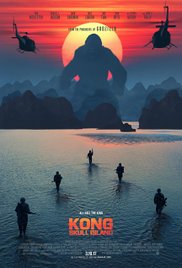 There have been already too many films on King Kong. The first and most memorable one for me was the 1962 campy Japanese version entitled KONG KONG VS. GODZILLA where audiences were treated to the climatic fight between the two monsters executed by actors in monster suits. The KING KONG films have been improved in terms of special effects. Even Peter Jackson had a go at it in the horrid 2005 version with an overlong attack by Kong on NYC. This latest edition is a reboot with two writers Dan Gilroy and Max Borenstein and a new director Vogt-Roberts whose only other film is an indie called THE KINGS OF SUMMER. But this new version takes a bit from each of the previous King Kong films, in fact the best from them, resulting in a satisfactory adventure film filled with special effects, action and much more humour.

The film begins very oddly in the year 1944 when a Japanese and American pilot are both shot down on Skull Island in the South Pacific (hints of HELL IN THE PACIFIC), They fight each other, only to be interrupted by the appearance of the giant Kong. Flash forward to 1973

when former British Special Air Service Captain James Conrad (Tom Hiddleston) is hired by government agent Bill Randa (John Goodman) to guide an expedition to map out an uncharted island in the Pacific Ocean known as “Skull Island”. Randa also recruits the Sky Devils helicopter squadron led by Lieutenant Colonel Preston Packard (Samuel L. Jackson) to escort them to the island, and the group is later joined by pacifist photojournalist Mason Weaver (Brie Larson), who believes the scientific expedition to be a cover for an illegal military operation and plans to expose it. There, they find Kong as well as the American pilot, Marlow (John C. Reilly) now older, having lived there for 28 years.

The island is also the home of other giant creatures, the most fearsome being the Skullcrawlers, the biggest one of which battles Kong at the film’s climax, similar to the fight between King Kong and Godzilla. The other action segments involve the characters battling other monsters including a spider, ants and flying pterodactyl-like birds. The characters are trying to get to the north of the island in order to be rescued.

The Conrad and Mason characters form the boring romantic couple of the story. Fortunately, Vogt-Roberts treats their romance as slight. The more interesting characters are Packard portrayed by Samuel L. Jackson, obsessed by his aim to kill Kong. There has hardly been a single film in which Jackson has not uttered the words mother f***er. So wait for this special scene. Reilly also steals the show as the comical Marlow who saves Kong.

The new take on the King Kong story actually works. At least the audience is spared from Kong being brought back to American to climb the Empire State building. But Kong still has the ‘hots’ for Brie Larson.

But most important is to stay till after the end credits. In the comical post-credits scene that primes the audience for a sequel, Conrad and Weaver are detained by Monarch and informed that Kong is not the only monster to roam the world. They are then shown archive footage of cave paintings depicting Godzilla, Mothra, Rodan, and King Ghidorah.