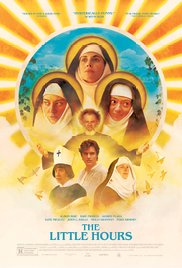 A young servant fleeing from his master takes refuge at a convent full of emotionally unstable nuns in the Middle Ages. Introduced as a deaf blind man, he must fight to hold his cover as the nuns try to resist temptation.

THE LITTLE HOURS is a naughty sex comedy based on The Decameron
by Giovanni Boccaccio, written and directed by Jeff Baena who reportedly did some studies in Medieval History.

The story involves a young servant, Massetto (Dave Franco) fleeing from his master (Nick Offerman) after been discovered frolicking with his wife. He takes refuge at a convent full of nuns by pretending to be a deaf mute at the advice of Father Tommasso (John C. Reilly). The nuns led by Sister Marea (Molly Shannon) are no innocent creatures of God and prayer. The film concentrates on three of these ‘mean nuns’ Sister Alessandra (Alison Brie, Dave Franco’s real-life wife), Sister Fernanda (Aubrey Plaza) and the most naive of all, Sister Ginerva (Kate Micucci) who eventually turns out to be the worst of the lot.
The humour is lame at best. It seems as if the script is grabbing at last straws at being funny. Take the dialogue of a nun at confession out of a scene from nowhere: Father, I have sinned. Yesterday, I took out a whole turnip and ate it without sharing with the sisters…” to which she is told to stop being greedy.

It does not help the narrative that there is no strong lead character but multiple characters including three nuns, the Father and the supposedly deaf-mute. The film appears to aimlessly move along with any goal, message or purpose.

For a film that puts in so much effort into location, look and period atmosphere all the characters speak in modern American accent. Dialogue like “Get the f*** out of here, don’t f***ing tap to me,” are common, even though the ‘f’ word was clearly never used in those times.

The film occasionally has the feel of a Monty Python film. The most identical scene is the one in the castle where two soldiers stand guard of Massetto’s cell.

Aubrey Plaza, most memorable as the bikini clad girl Robert De Niro drops his ice-cream on, plays a naughty Sister Fernanda who also serves as producer of the movie.

Director Baena attempts to pick up the film’s pace with a climatic rescue of Massetto from the castle prison by the three sisters. The decoy of a tortoise with a candle on its shell is a possible metaphor for the story’s pace.
For all THE LITTLE HOURS is worth, the film appears like an alternative remake of MEAN GIRLS set in a convent in the Decameron Tales era. But with less plot and unfortunately less humour.

NOW YOU SEE ME 2, the sequel to the unexpected hit NOW YOU SEE ME has the same 4 horsemen return for another round of magic trickery to astound audiences, whether they love magic or not.

Except for Lizzy Caplan taking over the female role from Isla Fisher, most of the original cast returns. Jesse Eisenberg plays the main role of Daniel “Danny” Atlas, the group leader followed by Woody Harrelson as Chase, Dave Franco as Jack Wilder, Caplan as Lula and Mark Ruffalo as the FBI mole. There are two sets of bad guys here. One is the FBI – a favourite target organization hated by (most) Americans and non-Americas alike. The other is Walter Mabry (Daniel Radcliffe) an unethical magnate that the Horsemen want to expose for unethical tactics, together with his father, Arthur Tresslr (Michael Caine).

Performances are key to a movie like this. It is not surprising for the filmmakers to assemble such an an impressive cast, all of whom inject sufficient seriousness and energy into the venture. But Radcliffe (HARRY POTTER) looks ill at ease at playing a bad guy as does Michael Caine.

The magic tricks performed in the film are especially outlandish. The are also performed really quickly with the solutions provided ever quicker. When the horsemen first appear again in public, they chose the most famous venues in London such as Trafalgar Square. The tricks include making rain disappear and people transported by plane. But the trickery is explained with the solution often so simple. The disappearing rain is accomplished through rain machines and strobe lights.

The best trick on display involves the horsemen forced to flee from their enemy. They leap off a rooftop through a chute and land up in China. If this act appears impossible, the revelation of how this occurs illustrates the power of imagination in a script that writer Ed Solomon constantly impresses. Though the film runs more than 2 hours, it is too long even though one hardly feels it.

Just as magic often uses doubles, the script cleverly adds a component of Merritt’s evil twin brother, again played by Harrelson, hamming it out the best he can in two different roles.

The business aspect of the film? NOW YOU SEE ME 2 hopes to pull in some big bucks for the flailing Lionsgate, the studio responsible for HUNGER GAMES and the TWILIGHT films, now in dire need of a big hit after the shares took a plunge last earnings session after a drop in quarterly revenue. But the bottom line is that this film provides just more of the same tricks – nothing more, nothing less. The first film was a surprise hit taking the box-office by storm. Lionsgate has lumped a larger amount of $90 million into the sequel, a sort of ‘we need a hit regardless of expense’. The film is up against stiff competition with WARCRAFT and CONJURING 2 both opening this same weekend. Looks like Lionsgate needs some magic on its own.

NEIGHBOURS the Seth Rogen comedy with Zac Efron as a frat neighbour was one of the best comedies of 2014. It featured the funniest sequence in a comedy that year – the Robert De Niro segment in which Efron, Dave Franco and gang all dress up as De Niro to taunt Rogen and wife for calling the cops the night before to lodge a complaint about their party.

NEIGHBOURS 2 has tough shoes to fill. But thanks to good writing from a script credited to 5 writers, the sequel makes it. Jokes like the air bags and the Dean Carol Gladstone character (Lisa Kudrow) from the first film are brought back into the sequel. If a few jokes do not work, one can be sure another couple will in a few minutes. With hardly any time for the audience to take a breather, NEIGHBOURS 2 comes across as intense as the dressed up clown that shows up at a tailgate party, a segment that is almost as funny as the De Niro sequence.

The success of this film lies a great deal on the comedic potential of both Efron and Chloe Grace Moretz. Efron plays the older frat member, now graduated and unable to find a decent job and living space while Moretz plays his younger female version looking to party all the time. Teddy Sanders (Efron) helps her at first in renting her sorority house that just happens to be next to the house that Mac (Rogen) and Kelly (Rose Byrne) is selling. But Teddy switches to Mac’s side to help him evict the sisters sorority. It is a fairly simple plot but with plenty of comedy potential, with the setups well staged. Efron has proven his mettle in comedy as in the first NEIGHBOURS and the recent DIRTY GRANDPA. Efron can even be funny in moments demanding the audience to show sympathy for his character. Teddy, for example, shows genuine puzzlement on why eggs get hard whereas pasta gets soft when dunked in boiling water, Moretz, however, has the straighter role. Her character serves to anchor the story. Her sorority sisters, Beth (Dope’s Kiersey Clemons), and Nora (Beanie Feldstein) and other sorority members are left with the task of providing the laughter.

NEIGHBOURS 2 also lifts comedy to a level of political correctness. The gay jokes are largely positive, with Teddy’s best friend, Pete (Franco) coming out and getting married to his new husband. On the female side, the sisterly bond fosters positive feminism while male chauvinism (such as in the depiction of girls as whores in colleges) is frowned upon. There is also a comedic discussion on the difference between a male teen vs. a female teen losing his or her virginity.

While NEIGHBOURS 2 is funny enough, its desperation to top the original is obvious. The film grabs at any opportunity for a joke, even to have didoes dressed as princesses to get a laugh. The result is the film looking a bit ‘all over the place’ compared to the more focused original despite the almost equal high to hit miss laughter ratio.