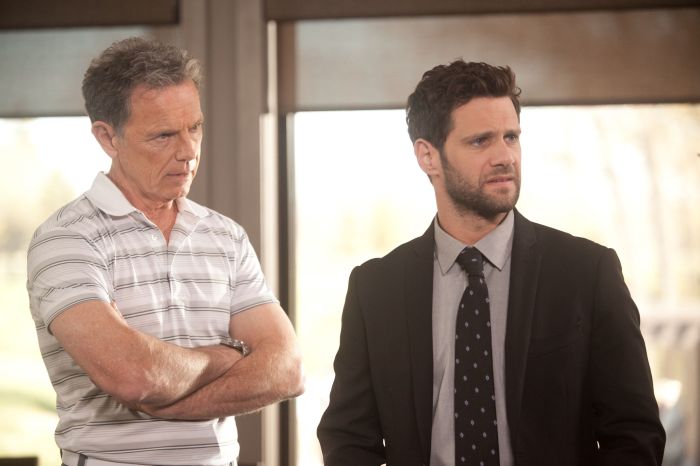 When a new dad (Justin Bartha) has to return home to bury his estranged father, things take a turn for the complicated when the dead man’s final wish is to have his ashes scattered on the field of his favorite professional sports team.

SORRY FOR YOUR LOSS is an acclaimaed small Canadian film that makes its debut this week and can be seen in Toronto.

When the SORRY FOR YOUR LOSS begins and rolls on, it takes a while for the audiences to establish that the film being watched is Canadian.  Everything looks American at first sight, including the familiar face of the main actor, Justin Martha who has been seen in THE HANGOVER.  Suddenly, as his character takes a plane to attend his father’s funeral, song with the lyrics “I hate Winnipeg” is heard on the soundtrack.

Marking Collin Friesen’s directorial debut, this heartfelt comedy follows exhausted new dad Ken (Justin Bartha) as he heads home to bury his own estranged father.  Ken leaves his wife and baby behind to attend the funeral.  Ken is talked into fulfilling his father’s dying wish, in order to claim his inheritance  – to have his ashes scattered on the playing field of the local pro football team. It is a task that proves tougher and funnier than it should be but with the help of his lonely, hippy mother (Lolita Davidovich, best known for BLAZE) and his father’s old golf buddy, Jeff (Bruce Greenwood, who gets star billing for the role), Ken learns a little about himself, his marriage, and most important, that there is nothing about dying that makes you a saint.  The father’s last words on video makes one fo the film’s funniest parts.  The script sneaks a few messages about life as well.

The film takes a few cheap racial shots – at the Koreans and China.  Have to admit that these are quite funny, not that I or the scriptwriters are racist or anything.  And as such as the script goes, the film cracks quite a few black humoured jokes at death, funerals and dying wishes, which are again hilarious.  If these are not laugh-out loud (as it would seem in bad taste to laugh too hard at these), they are at least good for an audible chuckle.  Jokes are original to say the least.  To the scriptwriter’s credit, there has never been so much humour generated from unfunny jokes, as evident in the funeral service segment.

The trouble starts when director Friesen attempts at getting serious.  After Ken has spent some time away, he gets into a bit of trouble and the wife gets visibly upset, especially after having to look after their baby all by herself.  The tension rises and Ken, who is no saint has started hanging around with a divorcee next door nieghbour who convinces him to  quit his job over the telephone.  This is when the film starts treading on predictable territory.  After a few laughs, the audience is in no mood to get serious.

The film is nominated for three Canadian Comedy Awards, including Best Feature Film, Best Writing and Best Performance in a Feature.