Skip to content
HomePosts tagged 'james gray'
Astronaut Roy McBride undertakes a mission across an unforgiving solar system to uncover the truth about his missing father and his doomed expedition that now, 30 years later, threatens the universe.

The concept of AD ASTRA began with director James Gray’s (THE YARDS, THE LOST CITY OF Z) idea which he announced in 2016 of making a  realistic depiction of a space travel movie.  The baby of both Gray who co-wrote, produced and directed and star Brad Pitt who also share producing credits, AD ASTRA is a very serious, if not always realistic depiction of a space movie.  For example, there is one scene where astronaut Roy McBride (Pitt) closes the hatch of his spaceship in the deeps of outer space and the audience can still hear the latch bang shut when one clearly knows that there is no sound in the vacuum of outer space.  But some minor complaints aside, AD ASTRA lives up to Gray’s ambition.  AD ASTRA has so far been positively reviewed by film critics and is quite a serious and authentically looking space drama.  Note that this is not an action movie but a thriller that plays around with other classic space movies.

Astronaut Roy McBride travels to the outer edges of the Solar System to find his missing father (Tommy Lee Jones) and unravel a mystery that threatens the survival of humans on Earth.  A surge has been received from the Neptune project near Neptune where the father had worked.  The surge might destroy earth and all in it.  Roy’s journey will uncover secrets that challenge the nature of human existence and its place in the cosmos.

To list a couple of important space moves in the past, Gray’s AD ASTRA draws from 2001: A SPACE ODYSSEY and GRAVITY while sharing common traits with APOCALYPSE NOW and his LOST CITY OF Z.

Gray attempts to show the marvels of space technology as in Kubrick’s 2001.  The modern look of the spaceship including its exterior shots are stunning, thanks to the expensive production design.  The rest mishap with the unexpected surge takes place on the exterior of a space antenna is one fo the film’s most exciting scenes.  There are not that many, but when they arrive, they are a knock-out.  The zero-gravity and the re-entering into the spaceship share common thrill elements with Cuaron’s GRAVITY.  Gray’s zero gravity fight with the two battlers tumbling around is a new set-up not seen (or seldom seen) before.  The crazy and obsessive father in AD ASTRA reminds one immediately of the Marlon Brando character in Coppola’s APOCALYPSE NOW and the traveller IN LOST CITY that lost himself reminds one of the protagonist in AD ASTRA.

The story is somewhat predictable with it set primarily on astronaut Roy McBride and his human condition.  For most part of the film, Roy is in acceptable psychological state but when he goes into ager mode, he is in trouble.  Director Gary anchors his story on Roy’s mental state.  There is little information provided on Roys personal life, with his wife played by Liv Tyler showing up for just a brief token moment.

Credit to 20th Century Fox on financing an thinking adult space movie.  It is a big gamble and hopefully it will do well at the box-office with Brad Pitt’s name to help.  Disney that bought Fox have expressed concerns on Fox’s slate of movies on making money like this one and Fox’s upcoming FORD V FERRARI. 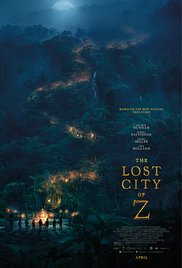 A true-life drama, centering on British explorer Col. Percival Fawcett, who disappeared while searching for a mysterious city in the Amazon in the 1920s.

LOST CITY OF Z is an exploration film about British explorer Percy Fawcett (Charlie Hunnan) obsessed with finding the lost city which he nicknames Z (pronounced zed in Britain and in the film and Zee in North America) in the wild Amazon jungles of Bolivia in South America.

The film is as expected of this sort of big productions, a handsomely mounted production with lots of candid shots of the horrors as well as the beauty of the wild. But it follows the same mould as many past exploration films, those that say track the expeditions into Africa or up Mount Everest or into Antarctica.

These films normal includes the identical premise consisting of:

getting limited or no funds for the expedition.

The same can be said for LOST CITY OF Z. Though Percy is first coerced into taking up the plight to Bolivia, he is initially reluctant. He is a soldier and a major (he gets promoted later to Lieutenant Colonel) in the British military. There is extended segment of him fighting in World War 1, always advancing towards the enemy lines, showing him the titular hero, but distracts from the main story at hand. In fact, Percy makes no less than 3 separate expeditions. For his final expedition – he had to fight for funds, most of it provided by the Americans and secondly but he British Geographical Society. It is ironical that the film was also financed by the U.S. with director Gray (THE YARDS being my favourite film of his), an American director offered the job of director. He was himself surprised, as many, for the reason he was offered the job.

The objection of the explorer’s immediate family to the task and the conflict that ensues.

The wife, Nina (Sienna Miller) objects but also decides to join him, though never realized. A strong argument is given here to update the film on a strong feminist point of view. The son (Tom Holland, the new SPIDER-MAN) objects vehemently but buries the hatchet at the end by joining his father n the third expedition.

The white man always doing what is right in the wilds

It is odd to see white men in full uniform or suits traversing the humid and wet jungles. Percy is often seen in full military garb in the incredibly uncomfortable hot weather.
But there is always something fascinating about watching a film about explorers making an expedition to foreign lands. This fascination is present and Gray capitalizes it with the strange vegetation and dangerous insects and animals around. There are scary scenes involving piranhas devouring human beings and native shooting arrows at Percy and his men.

The film is based on a true story. Percy and his son never returned from the last expedition,. This fact elevates the film out of the normal exploration films. Gray etches the main character here to a romanticized hero, worthy of the audience’s time at the cinema.

LOST CITY OF Z is long and runs close to 140 minutes. But the 3 expeditions and the war segment make the time run fast. Still, Gray’s film is a beautiful piece of filmmaking.