Skip to content
HomePosts tagged 'Karyn Kusama'
A police detective reconnects with people from an undercover assignment in her distant past in order to make peace.

There is a new super hero in town.  But this is a super hero of a different kind – not a Marvel or DC super action figure hero but a female down to earth cop with the super power of survival.

As the film opens, LAPD detective Erin Bell (Nicole Kidman) arrives on the scene of a John Doe murder and informs the responding officers that she knows the victim’s identity.   The responding officers clearly dislikes her and unafraid to show their feelings.  She gives them the finger when they ask the identity.

At the police station, Erin receives a $100 bill stained from a dye pack in an unmarked envelope. Using a contact at the FBI, she confirms that the bill is from a bank robbery committed by a California gang many years prior that she and her former partner Chris (Sebastian Stan) were embedded in as undercover officers.  She tells her superiors that she believes the bill and the John Doe murder to be proof that the gang’s leader Silas (Toby Kebbell) is once again active.

Erin is forced to work her way through the remaining members of the gang in order to find Silas. She begins with Toby (James Jordan), who was arrested but is now gravely ill and living with his mother on compassionate release. She manually stimulates him in exchange for the location of Arturo (Zach Villa), a member of the gang who attempts to atone for his past crimes by offering pro bono legal services to immigrants.  Arturo provides Erin with the location of DiFranco (Bradley Whitford), a lawyer who launders the money from the original robbery and from whom Erin deduces that Silas is active again because the money from the heist is almost gone. After threatening him, DiFranco gives Erin the location of the next money hand-off, which is performed by Silas’ girlfriend Petra (Tatiana Maslany). Erin tracks Petra, eventually intervening in a bank robbery committed by Silas’ new gang, and kidnaps Petra.

But the beauty of all this is that there is more than meets the eye.

Via flashbacks throughout the film, it transpires that Erin and Chris developed a romantic relationship while undercover, with Erin eventually becoming pregnant with Chris’ child.  Nothing more will be revealed of the story but that it is a bit annoying at the start for the audience has to piece the puzzle of the story together.  But the work pays off.  The fragmented narrative works eventually.  One also needs to take time after the film has ended to piece everything together to see how the time line has worked.

Kidman is marvellous and the almost unrecognizable Erin who strives for redemption for an undercover operation gone all wrong.  She even stole the money.  Kidman was nominated for a Golden Globe for her performance but lost out to Glenn Close.  The young Tatiana Naslany also proves herself a rising star.

The nitty gritty atmosphere of bars and rundown towns is effectively captured.  Director Kusama (GIRLFIGHT) again proves herself as a strong female presence in films. 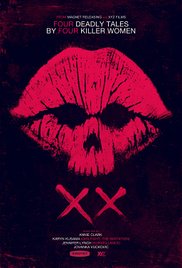 Directed by various directors (see below)

Not since the British horror anthropology DEAD OF NIGHT has a more memorable one hit the screens. A hit at this year’s Sundance 2017, the film features four horror shorts by four killer female directors.
Each director is given full creative license to tell any story they choose revolving around a female protagonist. While the directors have been given free creative rein within budget and time constraints, all of the segments themselves involve the horror genre in a new all-female helmed horror film.

The four films are outlined below. They are all equally good and worth a look. A brief description and review is given of each.

THE BOX (Directed by Jovanka Vuckovic)

THE BOX is every mother’s nightmare. The female protagonist here is a mother who when taking the TTC (Toronto Transit Corporation) train one day with her two children encounters a stranger carrying a red box, taken as a Christmas present. After the son takes a peek at what’s inside of the box, he stops eating. No reason is given for his lost of appetite as the boy feels fine As the days pass, he grows thinner and weaker. Vuckovic’s film is a very well executed exercise in suspense, despite it having an open ending.

Clark’s BIRTHDAY PARTY deals with the female protagonist, a mother trying to hide a dead corpse (her husband) from everyone. I am not a fan of dead corpse films like WEEKEND AT BERNIE’S, SWISS MARY MAN nor his one. I do not find anything hilarious about dragging dead body around through a whole movie. Clark plays it for laughs rather than horror.

DON”T FALL sees a group of four (2 males, 2 females) venturing into unchartered territory. They see figures carved in rock, not knowing what they stand for. Before they bed down in their trailer, horror strikes. DON”T FALL is at times quite hilarious, but it is also quite scary as the last female of the group tries her best to escape sinister forces. Good make-up and special effects!

HER ONLY LONGING SON (Directed by Karyn Kusama)
“Something is happening to Andy”. Kusama’s tale is from the point of view of a mother who sees strange behaviour in her son. Called to school, after her son tore out the fingernails of a classmate, she is surprised that he is unpunished as the principal claims the son to be special. Things take a twist when it is discovered that the mother knows more than it seems. This is the longest of the 4 films. It could also stand for the sequel for ROSEMARY’S BABY.