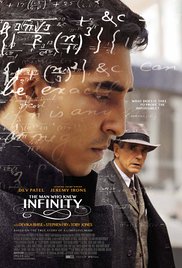 THE MAN WHO KNEW INFINITY is the bio pic of Indian mathematician Srinivasa Ramanujan (Dev Patel) based on the 1991 book of the same name by Robert Kanigel. Growing up poor in Madras, Nujan (as he is fondly called in the film) earns admittance to Cambridge University under the mentorship of professor G.J. Hardy (Jeremy Irons). Initially upset at Nujan for his pride and refusal to work out proofs for his mathematical theories, Hardy eventually relents and lets the horse run loose. Together, they achieve milestones in mathematics, cracking the almost impossible task of formulating formulae for partitions.

The first 30 minutes of the film is boring while the the film is set up. Nujan is just married, shown to love and excel in mathematics before fate forces him to leave Madras and serve his true calling. For a biopic of this kind, one expects him to face hardship and prejudice in his new country while finally proving himself to the nonbelievers while uniting with his family at the end. The film felt headed that way and one would almost walk out of the film if it had not changed course.

The typical story is altered by the First World War that creeps into the story. The second is the illness (T.B. or Tuberculosis) that Nujan falls prey to. The rest is pretty predictable stuff with the usual ‘stuffy’ English dialogue put in so that the film feels put up on a high pedestal since it is supposed to have a Cambridge university setting.

Patel was the second option to play the main role as the filmmakers wanted an actor internationally known to carry the film. Patel, who has proven himself apt in comedy as in SLUMDOG MILLIONAIRE and the BEST EXOTIC MARIGOLD HOTEL films, demonstrates here that he is also capable of carrying a more dramatic role, one that needs to show suffering from illness as well as desperation and despair. Irons looks convincing as the pipe puffing professor who ends up sympathetic towards Nujan’s course. Stephen Fry is remarkable in being able to make a lasting impression from a performance than lasts only a few minutes. The role of Bertrand Russell, the British philosopher and mathematician undertaken by Jeremy Northam is underwritten and exists only to make a few criticisms on Hardy’s character.

World War 1 is dealt with in terms of both prejudice and its futility. The former issue is demonstrated very effectively in a scene in which Nujan is beaten up by white English soldiers for being a freeloader in a country where the rest have to go fight and die for their country. It is anger that has its point and one almost impossible to resolve. Hardy organizes antiwar rallies dealing with the other war issue.

Associate producers Manjul Bhargava and Ken Ono are distinguished mathematicians who also served as the film’s math consultants. The math is shown only briefly but the message on the intricacies of infinite series and partitions comes across clear enough.

THE MAN WHO KNEW INFINITY make its case more of one of cultural acceptance than (one) in the development of new mathematical theories. Brown brings the film to an end all too quickly, wrapping everything up with Nujan’s eventual failure to survive from Tuberculosis.