Skip to content
HomePosts tagged 'Olivier Assayas'
The story of five Cuban political prisoners who had been imprisoned by the United States since the late 1990s on charges of espionage and murder.

WASP NETWORK is a multi-level political thriller that tells the story of numerous characters set in the Cuban American cold war.  Director Assayas did CARLOS which spanned a 181-minute lengthy running time.  WASP NETWORK has more stories to tell and it seems really rushed in Assayas’ storytelling in this 2-hour film.  The primary story is set in December 1990. Airline pilot René González (Edgar Ramírez) steals a plane and flees Cuba, which is about to topple into an economic crisis precipitated by the collapse of the Soviet Union.

Having abandoned his wife (Oscar winner Penelope Cruz) and daughter, René, now based in Miami, is regarded as a coward and a traitor, though in letters home he explains that he is fighting for a more just and prosperous Cuba as a member of the activist organization Brothers to the Rescue.

Another character is fellow exile and pilot Juan Pablo Roque (Wagner Moura). René gradually becomes more aware of the moral compromises the Brothers make to do their work — and the degree to which the CIA is involved in supporting anti-Castro activities.  Director Assayas makes the CIA the story’s chief villain.

in honour of the centennial of his birth. Von Trotta presents a detailed account of his life and his impact on filmmaking through excerpts of his work and interviews with family and contemporaries (Olivier Assayas, Mia Hansen-Love, Ruben Ostlund).

Her film begins with a segment of THE SEVENTH SEAL with actor Max Von Sydow and explanation of each shot in detail.  Von Sydow is seen waking up on a beach with his squire by his side.  He is seeing washing his face before meeting the Grim Reaper.  There is a fadeout of a chess board with the pieces washed away by the sea.  Each shot is explain by the voiceover, thus allowing the audience to see a different interpretation of the details as well as the mastery of Bergman’s work.

There is a compilation of Bergman’s other films including his more famous ones like WILD STRAWBERRIES, CRIES AND WHISPERS, HOUR OF THE WOLF and his later works like my personal favourite, the over 3-hour long FANNY AND ALEXANDER.

These and many other films are also displayed and put into perspective by actresses who have worked on many of Bergman’s films like Liv Ulmann who speak fondly of the man.  His thoughts and inability to love his own children are also revealed.  FANNY AND ALEXANDER however showed his brilliant portrayal of children.  Von Trotta maintains that all the children portrayed in his films are images of himself.

The film briefly traces his personal life living in Stockholm as a child.  Nothing is said of his birthplace, the religious town of Uppsala, which I visited when I was in Sweden, being an ardent Bergman fan.

The film has limited footage of Bergman in interviews and on the set.  But these are rare footages prized in the documentary.

The film is a bit long because it includes quite a few clips from the past Bergman classics.  But thy are an absolute pleasure to watch, so who is one to complain?  The most famous scene of all the Bergman’s films (the one where the elderly man looks into a coffin to see himself in it) is of course, in it.  I am surprised there was no shot of the image with the clock which has no hands.

The film whets the appetite for watching Bergman films, a retrospective of the Master’s work that will be presented by TIFF Cinematheque the fall of 2018.  Extremely insightful and a treasure for cineastes!  Von Trotta’s own film THE GERMAN SISTERS was selected by Bergman as one of his favourite films.

SEARCHING FOR INGMAR BERGMAN is a doc to be seen by all those who not only love the Master but for all those who love the medium of film.  (Bergman was the first auteur that introduced me to non-commercial film in Singapore, his films provided courtesy by the Swedish Institute in Singapore).

Set in the Parisian publishing world, an editor and an author find themselves in over their heads, as they cope with a middle-age crisis, the changing industry and their wives.

Assayas proves once agin his ‘auteur’ status with this playful yet literary and contemporary take on art imitating life.  Two couples are under examination as each member  having an affair with the opposite sex of the other couple, all still remaining friends.  Set in Paris.

The film begins with a publisher (Guillaume Canet) turning down the work of his friend (Vincent Macaigbe) who is having an affair with his successful actress wife (Juliette Binoche).  There is debate on the decline of publishing revenue compared to the likes of audio books and e-books.  This is a very talky film the most talky of all the Assayas films and shows the director’s intelligence on what is current in the world today – besides showing him a respected director.

Assayas fans will not be disappointed.  Also quite funny especially with the actress referring to Juliette Binoche at the end of the film, again art imitating life.

German director Magareth von Trotta pays tribute to Swedish director Ingmar Bergman in honour of the centennial of his birth. Margarethe von Trotta presents a detailed account of his life and his impact on filmmaking through excerpts of his work and interviews with family and contemporaries (Olivier Assyas, Mia Hansen-Love, Ruben Ostlund).

Her film begins with a segment of THE SEVENTH SEAL with actor Max Von Sydow and explanation of each shot in detail.  Many of his other films are also displayed  and put into perspective by actresses like Liv Ulmann who speak fondly of the man.  His thoughts and inability to love his own children are also revealed.  The film whets the appetite for watching Bergman films, a retrospective of the Master’s work that will be presented by TIFF Cinematheque this fall.

Extremely insightful and a  treasure for cineastes!  Von Trotta’s own film THE GERMAN SISTERS was selected by Bergman as one of his favourite films. 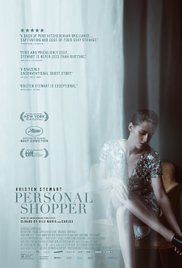 After the modest box-office success of CLOUDS OF SILS MARIA, director Oliver Assayas (IRMA VEP, CLEAN) and actress Kristen Stewart reunite with a moody ghost story called PERSONAL SHOPPER. The title character, Maureen is as the title implies, a personal shopper for a wealthy German model and designer, Kyra (Nora Von Waltstätten). Maureen also has a ghostly encounter from her recently dead brother who she was quite close with.
The closeness is explained in two reasons – necessary to convince the audience why she is so determined to have a spiritual encounter with him. One is that he is her twin. Second is that the both suffer from the same health issue, though someone could live till a hundred with it. What happened to the brother is explained by the doctor as a rarity. But Maureen cannot indulge in any excessive physical activity.

PERSONAL SHOPPER works off Maureen’s character with a few side incidents. Maureen rides along on a scooter, has a few ghostly encounters (though not fully explained who the apparitions are), runs errands and has an uncomfortable encounter with a stalker on her mobile phone. The film contains a loose narrative but a strong presence in Kristen Stewart’s character. Assayas is in playful mood here milking the most out of his actress.

One side incident involving a murder is done Hitchcock style. Maureen discovers a brutal murder just as in the scene in Hitchcock’s THE BIRDS when the first attack of the birds was discovered.

As a ghost story, the ghost appears as an apparition similar to old ghost films with dust stirred up with blurred figures. The seance scene also looks typical of those in early ghost stories.

In the end, one eventually asks whether this light hearted ghost story is any fun. Well it might be for director Assayas and his star, but it might be too much of a slow and long haul for others. Assayas leaves his film with an open ending that might have some audiences dissatisfied. But on the same hand, PERSONAL SHOPPER is not a film that lends to a Hollywood ending. Having one would have destroyed the entire atmosphere of the film Assayas had so carefully created.

The film is shot in English, with some French and German spoken (and an elaborate German song) with a moody setting in both Paris and London. Interesting but not great!