The family of Raymond, his wife Val and her brother Billy live in working-class London district. Also in their family is Val and Billy’s mother Janet and grandmother Kath. Billy is a drug addict and Raymond kicks him out of the house, making him live on his own. Raymond is generally a rough and even violent person, and that leads to problems in the life of the family.

In 1960 Albert Finney starred in Saturday Night Sunday Morning, a film which brought social realism to British Cinema. It stood out as it showed working class characters in extremely realistic scenarios. These characters usually struggled in their down and out positions in society. Saturday night Sunday Morning attempted to break stereotypes of working class people by showing them as intelligent and articulate youngsters. We fast forward almost forty years to see Gary Oldman bringing social realism back to the screen but with a much bleaker view for a modern audience.

The film focuses on the Raymond family in working class London. Raymond (Ray Winston) is the alpha male of the house hold. He is an aggressive alcoholic who is always out for a good time at the expense of someone else. Val (Kathy Burke) is the subservient wife who is victimised by her husband and does not have the strength to leave him. Their son Billy is a drug addict. He is forced to live on the street due to his father finding out about his addiction. Nil by mouth shows these characters struggle but is it their fault or the fault of their hierarchy in society?

Nil by mouth is a film about failures but there are not many to be seen here. The cinematography works brilliantly to provide beauty in the strangest of down and out places, the performances are terrifyingly accurate, and the direction is brilliantly constructed. The only problem is with the script.

The story may be a little bit too observant at times. The constant arguments and scenes of failure make it hard to maintain attention for some parts of the film as it almost slips into an x rated watershed soap opera. The film is relentless as there is not much comic relief provided. This is forgivable by the scenes which really stand out, such as Ray Winston on the lash with his mates.

This scene strangely forces the audience to relate to the characters playing drunken fools around town but also makes them scared of them at the same time. Oldman is not afraid of getting close to these characters. His frequent use of big close ups allows the audience to see every action and reaction from the characters in precise detail. Being an actor himself Oldman understands the importance of performance especially in an intense character which is presented here.

Winston is comfortably at home here playing the working class villain. The intensity of the character is evident but also the humanity is presented brilliantly by Winston who shines in those drunken moments in the film where he is on his own. Here Winston is allowed to bring the character to life as the audience witnesses his self destruction. Burke also offers an effective performance but is not as memorable as other characters because of the shy nature of the character in which she is playing.

Nil by mouth is an unflinchingly hopeless film. The characters are not taunted of a better life in anyway even though that is their desire. The film simply allows the characters to live without any feeling of pre constructed character arcs. 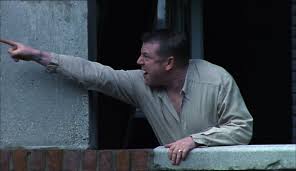 The film THE LEGEND OF BARNEY THOMSON arrives with zero fanfare but is a film that should be taken seriously. A film that could be alternatively titled THE DEMON BARBER OF GLASGOW, the film is based on the book “The Long Midnight of Barney Thomson” by Douglas Lindsay. The film begins when barber Barney accidentally scissors to death his boss, Wullie (Stephen McCole) in the barber shop that leads to another death, thus classifying him a serial killer. Barney becomes a Scots Sweeney Todd with several inept Glaswegian cops on his case.

The film takes quite a while to get a solid footing. The first third of the film muddles around with little humour, ingenuity or direction (and those unable to decipher the Scots accent might leave the cinema) but Carlyle slickly gets the action in gear and keeps the film moving during the next 2/3 of the film, leading it to a climatic mother/son confrontation and a Mexican stand-off. But the main plot of the reason Barney Thomson becomes a legend is still in effect, a comical farce that finally succeeds.

For a film entered on grisly murders that include chopping up of body parts, the film is free from violence. But the film is not without queasy scenes that include a severed penis and other assorted boy parts bundled up for the Royal Mail. The language is also particularly foul, especially the words coming out of Barney’s mother, oddly called Cemolina (Emma Thompson).

Three strong British actors headline the film. Carlyle himself, Thompson and Ray Winstone are thee actors I would pay serious money to see on screen. Thompson who is barely two years older than Carlyle, plays Barney’s mother with all the wicked relish she can muster. Her make-up by Oscar Winner Mark Coulier makes her look the part. Hissing out most of her lines with a fag always hanging from her mouth, this is Thompson the complete opposite, not the Thompson HOWARD’S END audiences know. The funniest part has her dipping biscuit dropping into her tea and then remarking: “I now have to fish it out with my spoon.” The mother/son confrontation in which she reveals how much she has done for him, including providing him dolly mixtures when he was a kid is priceless.

Carlyle is a Scots actor best known for his role in Danny Boyle’s TRAINSPOTTING. Carlyle’s debut directorial feature has the occasional feel of a Coen Brothers film (BLOOD SIMPLE, RAISING ARIZONA), but Carlyle who has worked with great English directors like Ken Loach (RIFF-RAFF, CARLA’S SONG), Boyle (TRAINSPOTTING) and Shane Meadows (ONCE UPON A TIME IN THE MIDLANDS) and the influences of the three directors are evident here. The atmosphere of small town mentality of Meadows is the most obvious.

THE LEGEND OF BARNEY THOMSON opened at the Cineplex Yonge and Dundas Toronto last week and continues with an added opening at the Carlton Cinemas. The film arrived with zero publicity and no press screenings, the only reason I can think due to is the film’s macabre nature. But this is a awesome little gem, that is a must-see!