Renegade filmmaker Oliver Stone knows how to get the blood of an audience flowing. He demonstrated this ability in the Oscar Winning PLATOON, political JFK and the controversial NATURAL BORN KILLERS. One can expect the same from his new film about whistleblower, Edward SNOWDEN (Joseph Gordon-Levitt).

The ads for the film goes… Patriot, dissident, or traitor? But director Stone portrays him as none of the three. At the film’s start, there is a scene that shows Snowden saying that he believes that America is the best country in the world. As the film goes along, he ends up wrestling with his conscience on what is right thing to do. In Stone’s film, the right thing to do is to expose NSA (National Security of America) for violating the rights of not only the Americans but of the citizens of every other country in the world by lying to their Governments. Yes, the NSA can track every single person in the world – the only lame excuse given is the need for prevention of terrorism. To those who actually believe Snowden to be a traitor, Stone’s film will either infuriate you or convert you. Stone lays out the facts, but in a prejudiced way, just as in PLATOON.

But Stone makes Snowden’s story more human by concentrating on his human side – and his love with his wife (Shailene Woodley). The most emotionally charged scenes are the fights he has with his wife. Stone also invokes the audience’s sympathy by showing Snowden’s illness – his proneness to epilepsy.

But the film’s most effective scene is the climax. If Stone knows how to manipulate the audience, this scene shows it. After Snowden’s live speech on the Internet, the live audience gives him a standing ovation. At the same time the image of actor Gordon-Levitt metamorphosizes into the face of the actual Edward Snowden.

The story of SNOWDEN is old news by now and unless one has not been reading he news, one knows that Snowden is presently living in Russia, not coming back to the U.S. as he believes, which is true, that he would not be given a free trail. This is how the film ends, so as to be accurate.

This is not the first film made about Snowden. Documentary filmmaker Laura Poitras made CITIZEN FOUR as she was called by Snowden himself when he was blowing the whistle. Poitras is portrayed by Melissa Leo in this film. CITIZENFOUR lays the facts out straight. The titles at the start of SNOWDEN declares that the film is a dramatization of true events. And that the film is, entertaining as it might be. 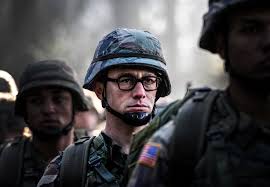