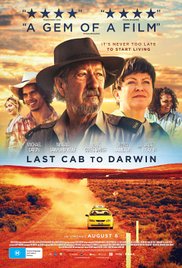 Based on the 2003 stage play by Reg Cribb, LAST CAB TO DARWIN is the story of a cab driver, Rex (Michael Caton). Rex who is diagnosed with stomach cancer, drives thousands of miles to Darwin in the Northern Territories where euthanasia is just legalized in order to to die with dignity. Rex is an unsavoury character and leaves behind the only woman Polly (Ningali Lawford-Wolf) who loves him.

This is the kind of subject that audiences turn away from. This might be the reason the film was hardly noticed when premiering at last year’s Toronto International Film Festival. The characters in Australian films are often harsh and crude, the landscape bleak and racism existent. But surprisingly, this film ends up a totally winning film at the end.

The film is basically a road trip. Rex drives off to Darwin, meeting other people on the way.

One of these people is Tilly. The film relies on the relationship of Rex and Aborigine Tilly. Both have led problematic lives and are reluctant to change. In a key scene Rex tells Tilly: “I don’t tell you how to lead your life and you don’t tell me how to lead mine!” But Tilly affects Rex’s life and vice versa. A lasting and precious friendship develops between the two.

Actor Michael Caton carries the film confidently on his shoulders, apt at conveying sympathy in a character hardened by life. He is without family and friends with no will to live. Those who recognize Caton will remember him in one of the funniest Australian low budget hit of all time, THE CASTLE. His role is similar to that of the one in THE CASTLE, an underdog fighting the big guys. In THE CASTLE, he fights the authorities who want to buy his home (a man’s home is his castle) to put in an airport runway. In this film he is fighting for the right to die. The federal government and church will do their all to prevent this as to allow it would be to give power to the common man. The film’s story thus takes on greater proportions. Director Simms keeps the tale of Rex intriguing from start to end.

The film contains a relevant message on euthanasia. Though a little predictable at the end, Simms’ film unfortunately tends to be too sentimental. The story also appears desperate in trying to get a happy ending, though happy endings are not always possible in some stories.

For a film with the theme on death, LAST CAB TO DARWIN is surprisingly full of life. It is occasionally a feel good movie. When I was in Sydney during Christmas when the home video of THE CASTLE was released, I could not rent a copy as all the copies were out in all the video stores. in Sydney. Quite unbelievable! LAST CAB TO DARWIN will not likely share the same success as THE CASTLE, but it comes pretty close as an unforgettable movie.