One of pouts of a good adaptation is that the adaptation contains the main story but has the author’s distinct imprint on it. From the very first 10 minutes of JULIETA, Almodovar’s adaptation of the book, written into a script by himself, the audience sees lots of Almodovar- and the Almodovar everyone likes.

The first scene is the modern apartment of the protagonist. She is dressed in bright red with matching bright red nail polish. She discards an envelope coloured bright blue and books of bright colours like yellow are seen on her book shelf. The next scene, a key one when she chance meets a friend of her daughter’s on the street, has the two quickly c friend is bing hurried along by three obviously queer queenie male friends. From the first two scenes, one can tell this is clearly an Almodovar with more surprised and delights on the way. One scene following is comical enough to feature a bright yellow garbage truck in the background.

JULIETE is one of Almodovar’s most talky films. Most of his later films have a 10- minute of so ‘talky’ segment in which some explanation to a plot is given. But JULIETA is talky from start to end. But this is not a bad or boring thing, as the script is filled with colourful dialogue, written by the master himself and full of his private anecdotes.

The film contains many shots of his past films. One for example has a group of young teens playing basketball. The scene has nothing to do with the movie, it is just thee when Juileta walks around the neighbourhood of her apartment, but it is reminiscent of the voyeuristic view of the bathing boys in the river in LA MALA EDUCATION, Almodovar’s best film. The same scene is visited later with teen girls playing the game.

JULIETA is about the mystery of life. Julieta’s daughter abandons her. It takes Julieat hers before she discovers the reason. It is here i the flashbacks where Almodovar’s film turns from stylized melodrama (no complaint) here to mystery, reminiscent of Hitchcock , complete with a score that sounds like Edward Hermann’s. In one scene, Lorenzo, Julieta’s lover even makes a reference to mystery writer Patricia Highsmith.

JULIETE contains many brilliantly executed scenes. One is the confrontation in which Julieta is told of her daughter’s intentions. “She has chosen her path, and you are not on it,” she is told. But the best scene occurs in the film’s subtle last minute, where a clever line told by Renato to Julieta ends the film.

Almodovar has progressed from comic to a serious director. His early comedies WHAT HAVE I DONE TO DESERVE THIS?, WOMEN ON THE VERGE OF A NERVOUS BREAKDOWN or KIKA have none of the dead seriousness of JULIETA. JULIETA is Amodovar at his most mature and also arguably at his best. 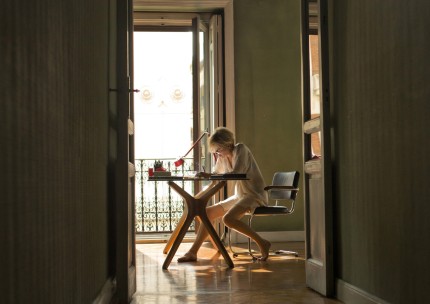