Skip to content
HomePosts tagged 'David Oyelowo'
Television adaptation of Victor Hugo’s classic novel, which follows Jean Valjean as he evades capture by the unyielding Inspector Javert. Set against a backdrop of post-Napoleonic France as unrest begins to grip the city of Paris once more.

A most arousing contemporary film set in today’s troubled world with a bonus message to boot.  What begins with the celebration of France’s World Cup eventually turns sour with the theft of a lion cub (that is the cutest and the real LION KING) from an East European circus by an African kid.

Three Paris cops, a black, a white racist and a rookie attempt to calm the racial tensions in the Muslim neighbourhood where the thief resides.

When the kid is flashed shot in the face, a riot on police brutality erupts.  Director Ly exhibits brilliant writing (he co-wrote the script) and excellent camera word while steering superlative performances from all his actors.  His totally gripping film will undoubtedly keep one on the edge of one seat right to be very end where surprises and twists in the plot abound.

A truly remarkable feat in definitely my personal favourite film of the festival.  And wait for the Victor Hugo quote from LES MISERABLES at the film’s end to conclude the events. 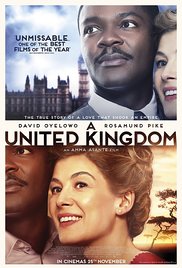 Director Amma Asante follows up her successful British period piece BELLE with another of the same, but this time pitting Britain against Africa.

A UNITED KINDOM begins humbly as a love story between two young lovers who first meet in 1947 in a jazz club. The trouble is that one is coloured and the other white. The coloured one happens to be a prince, first in line to the throne of Bechuanaland (today’s Botswana). He keeps this from her and so does director Asante of the film’s main plot. This is the biopic of Seretse Khama (David Oyelowo), the former African royal who courted controversy with his interracial marriage to Englishwoman Ruth Williams (Rosamund Pike) and later led his nation to independence from the British Empire as the first president of Botswana.
One trouble about scripts of period films is that the writers often forget that certain words or common phrases were never used in the past. An example is the word mother f***er, which cannot be used say, in a film set in the 70’s. In the case of Guy Hibbert’s script, an address in Parliament had the speaker use the phrase, ‘most importantly’ a term which was never used before the year 2000.

The 50’s atmosphere of Victorian London and the village atmosphere of African Bechuanaland are both beautifully created and shot by cinematography Sam McCurdy. London is often shot in grey while Bechuanaland in bright colours. There are also gorgeous shots of galloping giraffes and deer on the Botswana plains as seen from an airplane.

At one point in the film, I was wondering (and I am sure many in the audience would as well) what is so special about Khama, the prince – why is he so needed and what he can do to provide his people with a better life. The answer to this question is revealed – to Hibbert’s credit in Khama’s well-written and delivered crowd rousing speech the reason he should remain in line to the throne and how his vision is for Bechuanaland is to be the first to end black/white segregation in Africa.

The film is aided by the impressive performances of its two leads David Oyelowo and Rosamund Pike, bringing to life one of the great forbidden romances of the 20th century. Oyelowo has proven his acting mettle as Martin Luther King Jr. in SELMA and in A UNITED KINGDOM, he delivers a royal performance fit for a King.

Director Asant and scriptwriter Hibbert are careful in building up the film’s momentum. The film also rallies the audience’s anger at Britain’s injustice done against them both and against Bechuanaland. Though the film is clearly anti-British, the anti-British feel is lightened by the fact that the British public eventually supported Khama.

A UNITED KINGDOM ends up a satisfying biopic turned political drama. A more ambitious project for director Asante than BELLE, this film proves her successful and ready for another super period film.