Skip to content
HomePosts tagged 'Edward Norton'
Set against the backdrop of 1950s New York, Motherless Brooklyn follows Lionel Essrog, a lonely private detective afflicted with Tourette’s Syndrome, as he ventures to solve the murder of his mentor and only friend, Frank Minna.

Jonathan Lethem (based on the novel by), Edward Norton (screenplay)

Acclaimed actor Edward Norton returns to the director’s chair (this is his second directorial effort) with his passionate MOTHERLESS BROOKLYN based on the book which he read way back when, when he was starring in AMERICAN HISTORY X.  It was his long time goal to bring it to the screen and this 140 minute effort often displays his passion in the making of it.  Though by no means flawless, the 140-minute long haul moves pretty fast, thanks to the strength of the film’s source, the multiple award winning 1999 novel by Jonathan Lethem of the same name.

Norton who also penned the script made several changes to the book.  As he thought the film’s theme lent to more of a noir setting, he moved the 1999 modern setting to a 1959 one, move obviously requiring greater effort in filmmaking, because of not only period atmosphere, pros and sets. but in dialogue as well.  The cinematography by Mike Leigh’s favourite, Oscar nominated Dick Pope is to be commended.  His best scene is the one where the water on the sidewalk reflects a beautiful picture similar to the one where the refection of water reflects a plane flying overhead in Alfonso Cuaron’s ROMA.

The film follows a private investigator with Tourette’s syndrome, Lionel Essrog nicknamed MOTHERLESS BROOKLYN (played by Norton himself) who must solve the murder of his mentor.  Lionel Essrog, has Tourette’s, a disorder marked by involuntary tics. Essrog works for Frank Minna (Bruce Willis), a small-time neighbourhood owner of a “seedy and makeshift” detective agency, who is shot (stabbed to death in the novel) to death.  Together, Essrog and three other characters—Tony, Danny, and Gilbert— solve the case.  The reason for the deduction is that Frank looked after these 4 in the orphanage when they were kids.

It is best to know about the Tourette’s (tics) syndrome as the protagonist has the affliction and director/actor Norton makes sure his audience does not forget it.  It is a nerve disorder with onset in childhood, characterized by multiple motor tics and at least one vocal (phonic) tic. These tics characteristically wax and wane, can be suppressed temporarily, and are typically preceded by an unwanted urge or sensation in the affected muscles. Some common tics are eye blinking, coughing, throat clearing, sniffing, and facial movements. Tourette’s does not adversely affect intelligence or life expectancy.  In the film, Lionel is supposed to have heightened memory capabilities because of the syndrome.  Another fact is that adults suffering from this syndrome is a rarity, as they go away with adolescence.

The draw of he story is both the solving of the murder and the subplot involving the corruption of power.  Norton introduces the new character of Moses Randolph (Alec Baldwin) a city planner who is so obsessed with port ta he would do anything to gain it.  Baldwin has a field day with this role, that includes a long speech of what power is, and what it can do for people and how he craves and has it.  No one can stop me…. he boasts.  All this brings the more reason for Lionel to take the man down.

Because of the setting, the film looks and borrows from Roman Polanski’s CHINATOWN though understandably never reaching the heights of that classic.  But MOTHERLESS BROOKLYN is a totally enjoyable watch, with Norton giving full respect to his source material while never downplaying the syndrome for cheap laughs, but offering his audience intelligent look at the rare disease.

Set in Japan, Isle of Dogs follows a boy’s odyssey in search of his dog.

ISLE OF DOGS lies on many critics’ list as one of their most anticipated films of the year.  The reason is easy to see.  It has been 4 years since Anderson wowed both audiences and critics alike with the excellent THE GRAND BUDAPEST HOTEL.  ISLE OF DOGS is also Anderson’s second animated feature after THE FANTASTIC MR. FOX and judging from that film, ISLE OF DOGS arrives with high expectations.  Fortunately, these are all met.  The film also won Anderson the Silver Bear Award for Best Director for ISLE OF DOGS which also opened the Berlin International Film Festival.

In a dystopian future Japan, dogs have been quarantined and banished to a remote island due to a “canine flu”.  Major Kobayashihas (Kunichi Nomura) who has won the election and has convinced all his voters that this is the best idea.  The all-important question is then posed; “Whatever happened to man’s best friend?”

There is hope for the dogs.  A boy, ironically the major’s nephew, Atari (Koyu Rankin), ventures to the island to search for his dog, Spots (Liev Screiber).  There is at least one human being who still loves his pet dog.  Dogs Chief (Bryan Cranston), Rex  (Edward Norton), Boss (Bill Murray), Duke (Jeff Goldblum), and King (Bob Balaban) help him search for Spots and evade the authorities.  Eventually Atari discovers his uncle’s plot to eliminate all dogs on the isle and with the help of the dogs led by Chief saves the dog world.  The film is enough to seriously have audiences consider getting themselves a pet dog after watching the moving saga.

The film is shot in both English and Japanese.  The dogs speak English which English audiences understand while the humans speak Japanese which the dogs (and audiences do not understand).  This is a brilliant concept which is even more brilliant when one considers the reverse effect when Japanese watch the film.

The ensemble voice cast is impressive but largely wasted as many of the voices cannot be recognized.  Even Yoko Ono is on the list, but very few know what she sounds like, less alone the more famous stars that include Ken Watanabe, Frances McDormand, Harvey Keitel, Scarlett Johansson, Greta Gerwig, just to name a few.

And the film is extremely funny with more than I can count, laugh-out loud moments.  Anderson’s humour is mostly tongue-in-cheek, which is not the characteristic humour (slapstick, sarcasm, dead-pan) found in many films.   Examples are the way Anderson shoots his animated feature as if all happening is live action.  The segment on the liver transplant is done in an overhead shot as if the operation is actually filmed live with live characters.  Dialogue like one dog saying: “The ones I want are never in heat!” or “I see cats with more balls than you guys,” also come across as very funny in their situations.  The most hilarious of these occur after the film’s climax where the mayoral elections are finally over with the commentator announcing in a sort of anti-climaxed statement: “Boy, What a night!” 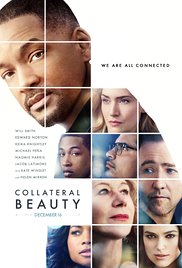 The subject of coping with death has been dealt in dozens of ways in films. In the recent ARRIVAL, the death of Amy Adam’s daughter is tied into the main plot of alien arrival. This worked. In another space film GRAVITY, the Sandra Bullock character is given the grief of a dead child to humanize her character. The ploy did not work and the story looked totally fake. In the recent praised MANCHESTER BY THE SEA, Casey Affleck’s character comes to terns with death in a gut-wrenching emotional tale of redemption. In David Frankel’s COLLATERAL BEAUTY based on a script by Allan Roeb, Will Smith’s character finally accepts his daughter’s death with all the sugar coating of all the Christmas cakes in a pastry shop. Despite attempts to make the story believable, COLLATERAL BEAUTY is plain horrid!

When the trailer for COLLATERAL BEAUTY first appeared on the internet, Guardian Magazine came out with an article heralding the arrival of the worst movie of 2016. And understandably so! The trailer showed Will Smith as a man grieving the death of his daughter by writing letters to Death, Time and Love. Scenes that follow show the personifications of these abstractions with Smith speaking to each of them, played by Helen Mirren, Jacob Latimore and Keira Knightley respectively. The music and mood are sloppy sweet sugary, especially catered for Christmas. Who would want to watch such Hollywood bulls***? There is one word for all this, in the spirit of Ebenezer Scrooge – HUMBUG!

But the film is not all that bad. The reason that Death, Time and Love are in the story, actors playing the parts, is to fool Howard Inlet (Smith) so that he can be deemed mentally unfit to hold on to his shares and thus prevent his firm from being sold. So three employees, who have worked with Howard since the incident of his daughter’s death, Whit (Edward Norton), Simon (Michael Pena) and Claire (Kate Winslet) plot the scheme. But this not not mean that the film is all that good either.

Director Frankel who directed THE DEVIL WEARS PRADA knows how to set up scenes. The first 10 minutes of PRADA when Meryl Streep, the no-nonsense head of the Prada office strides in – to the total disarray of all the other scattering employees is one unforgettable, beautifully executed scene. There are a few of these in COLLATERAL BEAUTY, like the confrontation scene between Howard and Time on the subway train, but the individual set-ups do not work on the whole. The metaphor of the falling dominoes is used to the maximum of a ridiculous three times. The film eventually settles to boredom as it is hard to care for characters made so unbelievable.

It is a complete waste to see Oscar Winners Winslet and Mirren in this silly story. Mirren does bring a bit of dignity into this nonsense but she must be laughing her head off, off screen.

The film partly works when it pokes fun at the credibly of the story. When Howard looks shocked at the sudden appearance of Death, Time and Love, the shock looks genuine – probably because of genuine disbelief. The film is the worst when Howard pines over his dead daughter – the worst of the worst has him watching a video of him playing with her, when she was still alive in a park, and shouting… “Daddy, daddy!” If this scene was not so obviously manipulative, it might have jerked a tear or two from a few of an innocent audience.

There is a twist in the plot at the end which makes no sense to the whole story of what Howard is going through.

Christmas brings along good films – Oscar contenders. But it also brings the worst of Hollywood films – COLLATERAL BEAUTY being one of them. 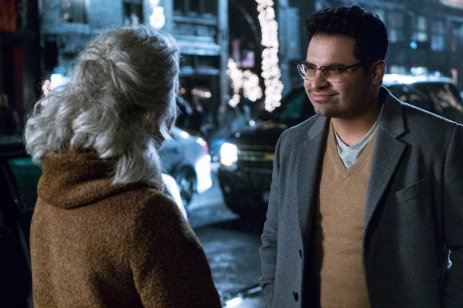