Skip to content
HomePosts tagged 'Kelly Macdonald'
The stunning landscape of Western Australia is the backdrop for an impassioned tale of love and grief in Gregor Jordan‘s adaptation of the acclaimed novel by Tim Winton.

DIRT MUSIC is based on the acclaimed novel by Tim Wintin adapted to the screen and directed by Gregor Jordan.  It is a tale of three luckless people entangled in a relationship set in the backdrop of stunning Western Australian coast captured beautifully by cinematographer Sam Chiplin.

Georgie, (Kelly Macdonald) stuck in a loveless relationship with legendary local fisherman Jim Buckridge (David Wenham) becomes enamoured with Lu (Garrett Hedlund), a young poacher who is encroaching on her tyrannical partner’s territory.  Georgie has an affair with Lu. But Lu takes off to the wild coast island while Georgie searches for him.  The trouble with this tale is director Jordan’s desire to stylize his storytelling that unfolds in flashbacks in a non-chronological order.  Or perhaps he is following the novel.

But it is not only confusing but frustrating and takes a while before one can figure out what is going on.  How British actress Macdonald got sucked into doing this Aussie piece is also intriguing.

Agnes, taken for granted as a suburban mother, discovers a passion for solving jigsaw puzzles which unexpectedly draws her into a new world – where her life unfolds in ways she could never have imagined.

As PUZZLE opens audiences to the world of jigsaw puzzles, PUZZLE opens the world of taken-for-granted housewife, (I work at home too, she says), Agnes (the wonderful also under-utilized Scottish born Kelly Macdonald) into a world of self discovery.

It all begins at her birthday party where husband Louie (David Denman) breaks a plate that she glues the pieces back together.  She is given a 1000-piece jigsaw puzzle which she puts together again and again.  She discovers this hidden passion and leaves the house in Bridgeport, Connecticut to buy another where she learns that a mother puzzle solver wants a partner for a competition.  She travels twice a week without her family knowing to Manhattan where she meets Robert (Irrfan Khan), a wealthy recluse and together put together jigsaw puzzles in record time.

At the same time, Agnes finds her life unfolding in ways she could never have imagined.

Director Turtletaub directs this delicate tale of a housewife’s self-discovery from a script by Oren Moverman and Polly Man based on the Argentine movie Rompecabezas by Natalia Smirnoff.  The film is dedicated to Turtletaub’s mother who we would think would also have been an under-appreciated mother.

Turtletaub’s only other directorial feature was GODS BEHAVING BADLY, a flop with negative reviews.  PUZZLE proves his worth given a second chance.  He is described to shoot with only a few takes allowing the actors to deliver their own interpretation of their roles allowing the film to be fresh.  True to what have been described, the performances are honest, fresh and occasionally powerful.  Macdonald (GOSFOD PARK), always an excellent actress, discards her British/Scots accent for an American role.  Macdonald is the one reason to see this moving story.  She is perfect even in he looks for the role.  At times, looking like a simple housewife, she can also look radiant, especially in the scene where she lying on the grass, the camera right above her when she talks to Robert on her cell phone.  Of the supporting cast, the young unknown Bubba Weiler stands outs Agnes’ elder son, Ziggy who does not get accepted to college and is stuck in a dead end job he detests working for his father in the auto shop.

The film’s best scene has the two of them Agnes and Ziggy having a heart-to-heart talk one evening.  It is a candid one whee they share unexpectedly each other’s secrets.  The shocking question Ziggy asks his mother is why she has not left his father.

The film has a neat spill on coincidences.  Agnes believes that there is a reason things happen as in the train where “Ave Maria” is sung to the words, “Tea, Maria” uttered by Robert.  Robert on the other hand believe that these are are coincidences.  The metaphor of the jigsaw puzzle as life is therefore quite obvious.  The jigsaw is a puzzle where the wrong pieces can be put right whereas life’s puzzle might not be solved in the same manner, as the film proves.

As expected, the family eventually learns what Agnes is up to.  She gains her independence and there is a neat ending as to what on she eventually decides on doing.  A housewife’s fantasy that audiences can relate to, thanks to director Turtletuab

A behind-the-scenes look at the life of author A.A. Milne and the creation of the Winnie the Pooh stories inspired by his son C.R. Milne.

There is one scene that sums up Simon Curtis’ film on the life of author A.A. Milne and the creation of the Winnie the Pooh stories inspired by his son C.R. Milne.  It is the one where father, A.A.  fondly called Blue (Domhnall Gleeson) serves his son fondly called Billie (Will Tilston) porridge he had made as the nanny has the day off.  Billie lifts his spoon to reveal a real lumpy porridge.  That is exactly the way director Simon Curtis (MY WEEK WITH MARILYN) has served his film and it is going to go down lumpy down the audience’s throats.

The film, however, does open impressively with shots (cinematography by Ben Smithard) of the beautiful English woods with sunlight beaming down the trees and spreading among the flowers, pretty much like the pictures of a Winnie the Pooh children’s book.  Blue receives a letter from the postman, the wife, Daphne (Margot Robbie) looking on, obvious that the letter brings bad news of the death of their son who has gone off to fight in the War.

The film tells the story of Blue’s creation of Winnie the Pooh and how the fame aversely affected the family especially the impressionable child Billie.  Blue goes to war and comes back with shell shock.  His evil wife Dafne, insists he keeps writing and he eventually lies it and takes the whole family to live in the country.  Evil wife gets upset ,leaves and threatens never to return unless the husband writes again.  Father and son bond in the woods and father creates Winnie the Pooh (the name Winnie coming from the rescued bear from Winnipeg, Canada).   The boy, Billie also appears in the Pooh books and known as Christopher Robin.  Fame and publicity prevents the boy from playing and having a normal childhood.  Confrontation results between husband and son (now played by Alex Lawther).  Amidst all this is the cheerful nanny, Olive (the wonderful Kelly Macdonald) who can never do any wrong.  She gets to tell the parents off and to calls the evil mother a horse in her face.

As the film is not based on a book, one wonders where all the material for the story comes from.  One can surmise that a lot has been imagined by the scriptwriters Frank Cottrell-Boyce Simon Vaughan.  The film turns into sentimental mush at the end with the news of the son’s death.  Dad, mum and Olive are grieving and more lumpy mush again when it turns out when Billie shows up.  The father son reunion is neither credible as well.

Robbie and Gleeson sport silly English accents.  At least Macdonald, the only one worth watching in this silly enterprise gets to keep her Scots accent.

The film has one believe that Winnie the Pooh did wonders for world peace just because one soldier fighting in the trenches hummed a Pooh tune.

The film ends with old photographs of the real characters in the film followed yes, by old photos of the real toys of the bear tiger, piglet and all.  As if the film is not sentimental enough. 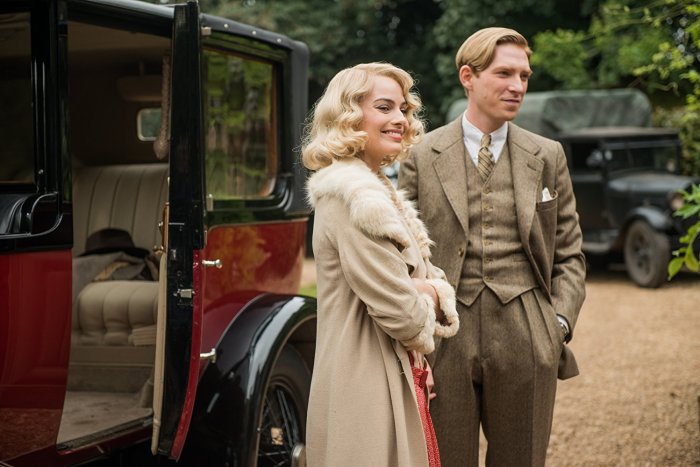