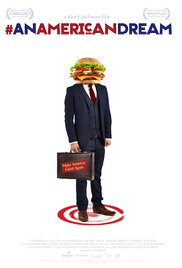 A cheerfully gullible college graduate embarks on a journey into adulthood that whisks him into the insanity of 21st century America, where he is beset by a parade of gun-crazed zealots.

With its American theme and setting, this Canadian film #ANAMERICANDREAM
that was first screened earlier this year at the Canadian Film Festival is quite the gem of a movie. It is original, hilarious, current, absurd, Kafkai-ish but mostly frighteningly entertaining.

The unlikely hero of the film is William Bowman (Jake Crocker) a 17-year old footballer, who when knocked unconscious during a game, is sent to the future, one that is as weird if not similar to the Australian film BLISS where the protagonist, who when suffering a heart attack witnesses odd things going on around him.

The education of William Bowman as the film calls it, takes Bowman through several amusing set pieces on life. The first has him doing internship for the Payne Financial Company where he learns that lying is more acceptable company culture than telling the truth. The second has him working for a born-again Tally Pepper who sets him up as a travelling salesman. The third has him running from the police and government. But there is no escape, as they can see everything he sees, due to a transplant of a camera in his eye.
Writer/director Finkelman takes the audience on a journey through America from Bowman’s point-of-view while satirizing everything from TV, corporate culture, school, the future, the second amendment to the country’s beliefs of the future.

Despite the film jumping from one set-up to another, Finkelman transits from one segment to another smoothly and hilariously. Bowman enters his office, the Payne building one morning to suddenly realize that every employee he sees is Asian. When he sees another Asian at his desk, he is informed that his company has been taken over and that he is out of a job. This takes him to the next segment.

Newcomer Jake Crocker is excellent in the role of a confused man tying to make sense of the craziness. Crocker is sufficiently good-looking that the audience can believe that most women will want to have sex with him. Or most men would want to punch him in the face. Both happens. The film includes some quite steamy sex scenes, showed in blurring images, but still sexually arousing.

The film goes into futuristic sci-fi mode at the end, when Bowman is being chased after becoming the most hunted man in the country. This segment gives Bowman the chance to meet a wide range of Americans from sexy teen babes to an old codger who ends up shot after helping him.

Finkelman’s film is full of surprises with a new one coming round every corner. The dialogue is also razor-sharp in observation and wit.
#ANAMERICAN DREAM is that rare Canadian film that is set in the United States not to be more commercial but because the story is set there. The film is also one of the sharpest Canadian films I have seen this year.