Brad and Dusty must deal with their intrusive fathers during the holidays.

One can tell that there is something wrong with a movie when the movie within a movie turns out to be more interesting than the movie itself.  In DADDY’S HOME 2, the families end up at one point stranded at a suburban cinema where a fake movie MISSILE TOW starring Liam Neeson is playing.  Neeson pays a character (voice only heard) that rescues his family from terrorists at all costs.  That fake film is heard for only a minute or two before director Anders turns the audience back to his nightmare Christmas movie – DADDY’S HOME 2

Moviegoers must have been very naughty during 2017 as Santa has rewarded them already with two awfully bad Christmas comedies – A BAD MOM’ S CHRISTMAS and now DADDY’S HOME 2.  DADDY’S HOME numero uno arrived on Christmas Day 2015 and went on to gross a remarkable $150 million domestically.  Thus arrives number 2 with Paramount hoping to do well again at the box-office.

The first film dealt with step-dad Brad (Will Ferrell) having to deal with his wife’s kids’ real father Dusty (Mark Wahlberg) showing up to undo all the values that Brad had instilled in his family.  HOME 2 ups the angst with the arrival of the dads’ dads in the form of Mel Gibson and John Lithgow.  Gibson has had quite the bad press and has been successful behind the camera (HACKSAW RIDGE, PASSION OF THE CHRIST) than in front of it.  Surprisingly, he is the funniest and best of the cast in the film, playing against his true character in life – a macho, gun-totting anti-feminist old goat.

Like all Christmas comedies, the usual disastrous set ups are there – the setting up of the electrical house decorations that go wrong (at least this one is quite elaborately done); the Christmas tree shopping; the snowball fight (not funny at all); the Christmas dinner; the feel good sentiment (it is only the children that count); the breaking of a hard heart (John Cena’s as the biological father of Dusty’s kid).  The worst of all is the film’s climax, which must rank as the corniest set-up of all time that takes place in a cinema theatre during a blackout.  There is a shameless promotion of the good of going to the movies where audiences are encouraged to turn to the next person to greet them.

A few non Christmas setups are included – the most notable being the bowling segment where one son has the problem of throwing his bowling ball into the gutter.  It is a rather simple setup that turns out to generate only a few laughs, if any pity laughs.  The predictable shoplifting gag does not work either nor the revelation of the notes that Dusty’s girlfriend takes of Brad’s wife that turn out to be good ones.

DADDY’S HOME 2 might work for the undemanding moviegoer.  There were people applauding at he end of the film, but critics can only shrug at this early Christmas enterprise.

Two tough Los Angeles cops, one who carries a lethal weapon (Glover) and the other who is one (Gibson), are teamed as partners in a highly unusual case involving a massive international ring which has its roots in Vietnam – a place they are both all too familiar with. This film, with its fresh, energetic combination of comedy, drama and action, has managed to spawn three highly successful sequels.

I had never seen the Lethal Weapon films prior to reviewing them this week. Which, as I understand it, is grounds for having my man card revoked. Nevertheless, of course I enjoyed the films, but it’s not without it’s criticisms.

The Story: The film hits the reset button on the “buddy cop” genre, if not creating it all together. The odd couple dynamic is the focus for the first hour of the film, with little coming out of the plot to actually have an overall effect on the outcome. Basically it’s 50 minutes of the film telling us “Riggs is crazy” and “Murtaugh is “too old for this shit.” It’s only once the film gets to an hour into it does it start going anywhere. That’s my biggest criticism of the film. Usually, character driven films are what everyone wants, and don’t misunderstand me, the creation of these characters is what makes the film great and the franchise sustainable. But there are better ways to go about it. Now once it gets into the actual plot, it becomes extremely interesting. The ties to these characters back stories and their draw to see it through becomes deeply routed in the audience’s desire. That, mixed with the great characterization and explosions is how you make a entertaining film.

Acting: It’s really Mel Gibson’s movie to steal. And he does. It’s always the offbeat character that everyone loves the most. But Glover provides a sturdy straight man (in terms of characterization – not sexual orientation…just to be clear.) The lack of problem here is while Gary Busey is menacing, he’s somewhat underused in this film and doesn’t get much play. While it did reinvigorate his career, there’s really not a whole lot going on there. In the end, it’s Riggs that keeps the movie going when it starts to lull in the action.

Directing: Richard Donner does a great job for what it’s worth. He made a successful film that launched a franchise. However, he is guilty of 80’s stylistic value. Ain’t no dodging that one.

Cinematography: While it doesn’t have the soft focus of the 80’s style (thank the Lord above) it does have the same old fog machine look on occasion. Some of the action scenes are shot a little too tight for my taste, but they work. And again, there is some guilty 80’s moments with the slo-motion shot to death scenes.

Production Design: 1986. Again…not a whole lot more to be said there.

Editing: Here’s, once again, where my criticism lies. There’s too much character setup in the first hour. It becomes filler to be honest. We could deal with one or two short situations that establish Riggs is crazy and Murtaugh is too old. But we get it drawn out in several long scenes that just cover fill up time. It could have been tighter.

Score: Now while most of the action scenes are scored with the stereotypical 80’s classical score (no synthesizers thank the Lord yet again haha) the drama and comedy are scored with this saxophone type style. Which works very much for the buddy-cop tone of the film and is repeated in the sequels. It establishes an overall character to the franchise itself. A smart move on the part of the film makers that paid off for the long run.

In closing: In my honest opinion, the film is dated and overrated. Does that mean it doesn’t stand well on it’s own feet? Not at all. It’s an enjoyable movie. But there could have been so much more going on. It was fresh for it’s time and that’s why it’s so highly rated. So now that we’ve spent one hour on characters and one hour on a plot, let’s see how the sequel fares up…. 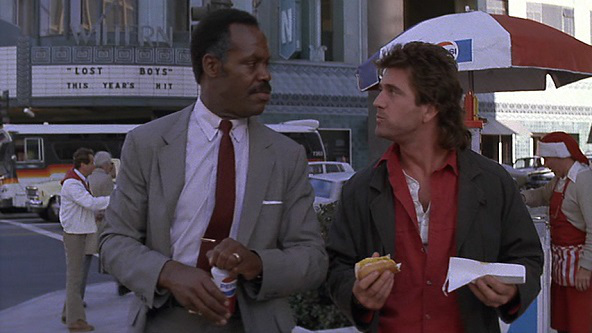 After about a decade absence from the director’s chair (his last film was the misunderstood APOCALYPTO in 2006), the director of BRAVEHEART and THE PASSION OF THE CHRIST returns in top form as if redeem in himself of all the bad press he had garnered since he said and did some foolish things. It’s another situation in this 21st century social media era where the outside events of the director “tarnish” the actual film itself. Think “Birth of the Nation”. Two films that should potentially receive multiple Oscar nominations. But will they? And should they?

The film is a true story, bravely told, inspiring as well, set in World War II featuring the most unlikely of heroes – a pacifist who refuses to carry a rifle. Not only does the film boast inspired direction by Gibson, but it also contains perhaps the best performance of the year by a young actor, the most recent SPIDER-MAN, Andrew Garfield – if not the best performance of his career. It should be a crime against someone like Garfield for being so good-looking and talented at the same time.
The true story of medic, Private Desmond T. Doss (Andrew Garfield), who won the Congressional Medal of Honor despite refusing to bear arms during WWII on religious grounds. Doss was drafted and ostracized by fellow soldiers for his pacifist stance but went on to earn respect and adoration for his bravery, selflessness and compassion after he risked his life — without firing a shot — to save 75 men in the Battle of Okinawa.

The script by Andrew Knight and Robert Schenkkan can hardly go wrong. What the story needs, the script does. Firstly, it strongly establishes the reason for Desmond’s behaviour and beliefs. The contradiction of the father’s character is also smoothly tied in with conviction. The film is basically divided into two parts. The first is Desmond’s basic training (boot camp) where he is mocked by both his superiors and his fellow soldiers. He is also given the dreaded blanket party at night. The second part of the film and the most brutal is his service in the battlefield. At times, the film feels like Stanley Kubrick’s FULL MEATL JACKET which contains two similar segment but Gibson’s second section, unlike Kubrick’s is the more exciting one.

Besides Garfield’s outstanding performance, Vince Vaughan delivers an equally impressive one, the role of a stern sergeant, much uncharacteristic of what audiences expect from him. Aussie Hugo Weaving (THE MATRIX movies; PRISCILLA, QUEEN OF THE DESERT) is also perfect as the hard drinking father who when finally does good and justice for his son, whose performance will break the hardest of hearts.

Those who are able to remember THE PASSION OF THE CHRIST will see more tortured scenes in the film. The battle scenes – with heads exploding; guts pouring out; dismembered bodies and wounds infested with maggots and rats are not easy ones to watch. The scenes rival Spielberg’s unforgettable beginning sequence in SAVING PRIVATE RYAN and one can only guess what is yet to come with Christophe Nolan’s upcoming DUNKIRK.

The closing credits serve to prove to the audience that as wild as this story might be, the truth exists. Archive footage of the real heroes as depicted in the film speak out, often saying the identical words in the film’s script.

America needs her heroes in these difficult times of terrorism and racism. AMERICAN SNIPER and SCULLY are heroes depicted in films that have done extremely well at the box-office. Opening close to Remembrance Day, this film deserves to do well and might be the hit the flailing studio Lionsgate needs. Forget DOCTOR STRANGE! This film hits the mark! 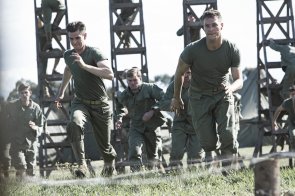