The story of Oscar Wilde, genius, poet, playwright and the First Modern Man. The self-realisation of his homosexuality caused Wilde enormous torment as he juggled marriage, fatherhood and responsibility with his obsessive love for Lord Alfred Douglas, nicknamed Bosie. After legal action instigated by Bosie’s father, the mad Marquess of Queensberry, Wilde refused to flee the country and was sentenced to two years at hard labour by the courts of an intolerant Victorian society.

Wilde is the biopic telling the infamous story of Oscar Wilde, one of Ireland’s and the Victorian era’s greatest playwright and poet. Above that he represented the rise in the appreciation for all things aesthetic, fashion and style as well as being one of the wittiest historical figures that I can think of. His life wasn’t all plaudits though, and he courted controversy to the full.

The film begins with Wilde returning from America, marrying Constance Wilde and having two boys, Cyril and Vyvyan. Then it begins, not wanting to over-state anything, his rise and fall. Taking the theatre world by storm, Wilde’s plays illuminate the west end and he becomes the toast of the town. With an invigorated zeal for socialising, Wilde acquaints himself with all the lavishness his success affords him.

This ignites a spark within Wilde, especially after becoming familiar with Robbie Ross. After their meeting Wilde’s ‘outs’ himself amongst the homosexual community, and in doing so becomes the person he may’ve always known he was. Then the shift moves from his work to his personal life. An intense affair rises between Wilde and Lord Alfred Douglas, nicknamed Bosie. Bosie is drawn to the artful and wise Wilde, while Wilde is drawn to the youthful pretty Bosie.

Their relationship has its ups and downs, mainly due to Bosie’s impetuousness, but ultimately has its dramatic anchor in the film as in Wilde’s life by being the scandal that brought shame upon Wilde’s family and indeed his professional reputation. Bosie’s father, the Mad Marquess of Queensberry, files a lawsuit against Wilde and his lewd illegal behaviour.

The ensuing court case, is widely publicised and the witch hunt that surrounds it sees the steadfast Wilde prosecuted for his actions and sentenced to four years hard labour after refusing to take exile. Then we witness Wilde’s decline, removed of his style in gaol. Even on his release when he takes refuge in Europe his healthy withers and Wilde dies resolute but very much alone in Paris, 1900.

As a fan of Wilde’s work, I feel this film does tremendous justice to the man, played with sheer perfection by Stephen Fry. Fry said of the role that it was the one he was born to play, and he is in no way over stating that fact. And the filmmakers have done a wonderful job of adding to the creation by giving Fry just the right appearance as a young-twenty-something but also as the broken-aged-man Wilde becomes during his incarceration. And special mention should go to Jude law who, aside from looking good in the role, acts as a great folly to Wilde, being that they are at different stages of their lives.

The only criticism of the film is that those who aren’t familiar with Wilde may struggle to be enraptured by the drama of the film which never really peaks. I think that to be slightly mis-guided as Wilde himself fully understood what was going on, there was no outrage from him, though he did stand resolutely and argued his case to spite all that, though sadly without success. What stands is the memory of such outrageous persecution from the justice system and society to persecute someone, when today that wouldn’t even enter the consciousness. 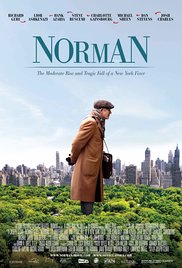 Not to be confused with the other film NORMAN made in 2010, this new NORMAN comes with a long subtext in the title that essentially tells everyone what the film is about.
Written and directed by Joseph Cedar, NORMAN (film’s original title was OPPENHEIMER STRATEGIES) tells the moderate rise and tragic fall of the said man. The film is well shot and directed as a combination of set pieces are performed almost meticulously by veteran actor Richard Gere. At the age of 67, Gere could be almost be doing old fart movies like GOING IN STYLE. (Michael Caine, Morgan Freeman and Alan Arkin share the average age of 80), Here in NORMAN, Gere is in top form, articulating his character who still has the ability to charm and ‘cheat’ investors of their hard earned savings.

Cedar’s film begins with two dramatic set pieces that show Norman hard at work. In the first, he is unsuccessful while he succeeds in the second. In the first segment, he stalks a high-profile businessman interrupting his private life, while he is jogging in the morning to pitch his deal. In the second, he successfully courts a young politician, Nicha Eshel (Lior Ashkenazi) after paying for his shoes at a shoe store. (French actor Isaac Bankole is immediately recognizable as the shoe salesman who flatters Eshel.) Three years pass and Eshel becomes Prime Minister of Israel. Eshel’s name is used to no end by Norman in all his present and future schemes.

For one, nothing is mentioned of Norman’s background. Norman is shown the way he is – no girlfriend, minimal family and a loner at heart and in life. It is hard to identify with a person like Norman and especially as he is a trickster at heart. Norman has few redeeming qualities. There is no suspense in the way he could have got caught which could have added some needed suspense into an otherwise monotonous film.

Gere is good and the film contains an impressive cast of actors that include French Bankole and Charlotte Gainsbourg and others like Hank Azaria (always appearing in con films), Michael Sheen, Dan Stevens and Steve Buschemi. One could say that Gere is too good looking an actor to play a shady character like Norman. But one could argue too that as Gere said, when he was here for the film at TIFF that it shows that there is a Norman in each one of us.

The film is shot partly in Hebrew and English in New York City where the story is set. NORMAN is not bad but could be better. And why not?

PASSENGERS arrives at the height of the success of polished looking sci-fi hits like THE MARTIAN, GRAVITY and ARRIVAL. PASSENGERS also looks stunning, thanks to the awesome art direction, wardrobe, cinematography and sets. But unfortunately, the film soon gets lost in space, unable to wake up from its initial promise.

The film’s action takes place aboard the Starship Avalon, on a 120-year voyage transporting over 5000 colonists to Homestead II, a planet so far from earth the journey takes 120 years. The colonists are placed into hibernation for the journey. The ship hits a meteor storm. A malfunction wakes up a passenger, mechanical engineer Jim Preston (Chris Pratt), 90-years early. The film spends a lengthy first 40 minutes or so with Jim roaming around the spaceship alone discovering the horror of not only being the only one alive but knowing he would be dead by the time the ship reaches its destination. Humorously, he tries to send an S.O.S. message back to earth but realizes that it not only takes 5 years for the message to reach earth but that it will cost him several thousand dollars.

He gets some companionship (and free drinks) from a bartender android (Michael Sheen). Preston notices a beautiful sleeping writer in another pod, Aurora Lane (Jennifer Lawrence) and decides to wake her up from hibernation to keep him company. (The script could also have been more imaginative than naming the heroine Aurora.) This means a death sentence for her as well. They fall in love and things go smoothly till she learns the truth. This is when the film falls apart.

The couple eventually get back together with Aurora finally saving Jim from being lost in outer space very much the same way Matt Damon almost got himself lost in THE MARTIAN. Things get even more ridiculous with an oasis present complete with birds (yes, birds – where did they come from?) by the 90 years the ship reaches Homestead II.

PASSENGERS is directed by Morten Tyldum who made the World War II thriller THE IMITATION GAME. In PASSENGERS, he and the scriptwriter Jon Spaihts cannot decide if the film is supposed to be a thriller, horror, romance or sci-fi adventure. They decide on ‘all of the above’. This is basically a story of a really intelligent writer and a creepy stalker who should pay for his sins. Instead, he is forgiven and saved and made a hero. PASSENGERS would have succeeded as a horror flick close to what ALIENS was.

The film is also basically a two handler. Lawrence and Pratt are fortunately two fine looking actors that audiences can look at for two hours. But the introduction of Lawrence Fishburne as Gus, an engineer also woken up by pod failure, adds a welcome change to the proceedings.
There are a few action sequences such as Jim’s race against time to repair the ship before it explodes in heat and his rescue from outer space. These are two of the film’s most ridiculous segments. PASSENGERS ends up both ridiculous and plain silly.