Skip to content
HomePosts tagged 'Orson Welles'
A Hollywood director emerges from semi-exile with plans to complete work on an innovative motion picture.

In the words of Orson Welles himself: THE OTHER SIDE OF THE WIND is a crazy picture.  It is not a documentary.  It is a departure from moviemaking.   Everybody will think the film is autobiographical but it is not.

THE OTHER SIDE OF THE WIND is a film within a film.  It is supposed to be Welles’ comeback film after being ostracized by Hollywood.  He never completed the film and passed away with the footage locked in  a Paris vault.  Funds were eventually provided by Netflix for its completion.

The film opens by a voiceover describing the final day of Jake Hannaford (John Huston), an aging Hollywood director who was killed in a car crash on his 70th birthday.  The narration is from an elderly Brooks Otterlake (Peter Bogdanovich), who had been a protégé of Hannaford’s. Just before his death, Hannaford was trying to revive his waning career by making a flashy film, laden with gratuitous sex scenes and violence, with mixed results. At the time of Hannaford’s party, this film (titled The Other Side of the Wind) has been left unfinished after its star stormed off the set, for reasons not immediately apparent to the audience.

A screening of some incomprehensible parts of Hannaford’s unfinished experimental film takes place, in order to attract “end money” from studio boss Max David. Hannaford himself is absent, and a loyal member of his entourage, the former child star Billy Boyle, makes an inept attempt to describe what the film is about. Intercut during this, we see various groups setting out for Hannaford’s seventieth birthday party at an Arizona ranch. Hannaford arrives with a young Brooks Otterlake, a commercially successful director with a talent for mimicking celebrities, who credits much of his success to his close study of Hannaford.

The story goes on but the film is all over the place and hardly coherent when one finally figures out what is happening.  The film contains a few stunning segments, the most notable being these two most sexually explicit ones:

– the beginning graphic lesbian steamroom scene, rapidly intercut, featuring Oja Kodar (the actress at the time was Welles’ lover), which Hannaford is in the process of filming at the start.

the sex scene in an 1968 Ford Mustang fastback. The car takes off in the rainy night, and as the boyfriend drives, the pair have sex in the passenger seat next to him. After a few minutes the boyfriend stops the car, grabs the girl off of Dale (the actor playing the lading character in WIND), and appears to make an attempt to engage her for himself. She rebukes him and the pair is then tossed out. John Dale, with his pants halfway down, lands in a large puddle.

THE OTHER SIDE OF THE WIND is definitely not a masterpiece as Welles hoped it to be.  It is not even a good film.  It is madness personified into a film, with a few absorbing segments as well as unconnected boring parts in between.

THE OTHER SIDE OF THE WIND will be more interesting to cineastes (for example; what does the title even mean?) but for the rest the film is best avoided. 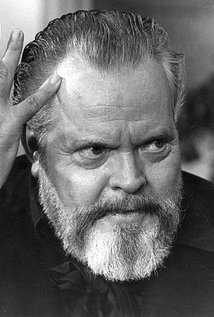 Read reviews and watch videos of the best of the actor:

5. THE LADY FROM SHANGAI, 1947 – The beach picnic scene from the classic film Lady From Shanghai where “Black” Michael O’Hara (Orson Welles) describes shark fishing off the hump of Brazil.

3. THE MAGNIFICENT AMBERSONS, 1942 – The scene from Orson Welles’ The Magnificent Ambersons where Georgie gets his comeuppence. Arguably the most powerful scene in the film.

ORSON WELLES COMMERCIAL – These are some original takes for the legendary Orson Welles “We Will Sell No Wine Before Its Time” commercial, and show that working with the legendary Mr. Welles could be…memorable.

He was so good he almost lived up to his own publicity. And that’s saying something.

Welles biography is almost as familiar as his movies; his rise to prominence and just as sudden fall, the inescapable comparisons to his most famous creation. But that has nothing to do with him being a great director, let alone the second best ever.

The other director’s on this list are all here for their body of work and what that offered up to filmmaking, even Griffith. And Welles’ is certainly great; like Griffith he never stopped experimenting or innovating. But really, he’s on it for “Citizen Kane.”

Considered by many to be the greatest film of all time, it’s innate greatness is not as relevant to Welles directorial skill as it’s innovations. Film wasn’t stagnant until “Kane” came along, but not since “Birth of a Nation” have so many new ideas been crammed into such a small space.

Like Chaplin, Welles was an actor and a director, though unlike him it’s likely he was always a director first, even before he became one. It probably had something to do with the gargantuan ego. But it was that ego that made him think he could pull of something like “Kane.”

Unlike “Nation” it’s more than just the innovation that makes “Kane” so great, which is also why Welles is so much further up the list. Possibly more than any other director on this list, he was keenly aware of the various parts and how they fit together. Many director’s have their own unique strengths, but Welles seems to be the only one–for this one film anyway–who had no weaknesses.

Most likely the best actor to ever turn to directing, and certainly the most successful at it, Welles came up in the theater where he learned how important all of the different pieces were at moving an audience. There will likely always be a great deal of controversy over whether he actually deserved his shared writing credit with Herman Mankeiwicz, but there’s no doubt who the author of the “Kane” was.

The testament to its power, the proof that calling it isn’t the cliche it sounds, is just how influential it has been, and through it Welles himself. Almost every single director who’s come after “Kane” has imitated it in some way. And, like Ford, the ones who haven’t have done so deliberately.

For all of these reasons Orson Welles is probably the most influential, most imitated director on this list. And very nearly the best.