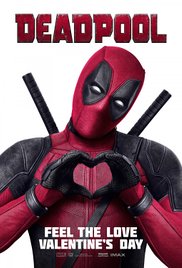 First of all, some background on DEADPOOL. Those familiar with the marvel character, best described as an uncensored personality would best skip this paragraph. DEAD POOL is the name of the lead character previously known as Wade Wilson (Ryan Reynolds). The character is less a hero than an antihero. He describes himself in the film as a bad guy paid to take out other bad guys. At first a normal human being, then voluntarily subjected to experiments in order to cure his cancer, Deadpool ends up totally mutated but also with accelerated healing powers and fighting agility. He is badly scarred especially facial wise and wears a skin tight costume. He is angry, swears all the time and beats various people up, depending on his mood. The fans expect the film to be extremely violent, especially in the already famous touted skewer scene in which Deadpool props a baddie up with his twin blades. Director Miller satisfies the fans with the segment not only shown twice, but also in slow motion.

To director Miller’s credit, the film is energetic and funny enough for the audience to be distracted from the film’s flaws. The film begins with mock opening credits that no doubt is funny at first, but soon wears out its welcome. It says for example that the film is directed by an overpaid tool with all other members of the the filmmaking team insulted except for the writers. The real credits appear at the end of the film.

The film begins with Deadpool (Reynolds) taking a cab, driven by Dopinder (Karan Soni) to fight his enemies, the main one being Francis (Ed Skrein from the TRANSPORTER remake). Deadpool has a lengthy irrelevant but hilarious conversation with Dopinder. The fight ensues, but because Deadpool has forgotten his bag of weapons, has only 12 bullets in his gun. As a result, he has to cut off his hand from a handcuff in order to escape in a garbage truck. The film flashes back to how this scene takes place. In the process, the audience learns that the film is a love story – one between Wade Wilson and Vanessa (Morena Baccarin).

The film’s storytelling format is chopped up unnecessarily as if the target audience is assumed to have a very short attention span. There is no need for the excessive violence, except maybe to satisfy the hardcore Deadpool comic book fans. The humour is forced, the dialogue terribly crude and blunt and many characters appear out of nowhere. An example is the blind old back lady, Al (the wonderful Leslie Uggams) who ends up as Deadpool’s lover, living in his apartment. Her quotable line: “I miss my cocaine.” All this might be entertaining to some but on the other hand , terribly boring to others, like the film critics.
For what it is worth, DEADPOOL delivers to its core audience. The film turned out better than I expected, having very low expectations after watching the trailer. But I am not the core audience. DEADPOOL fans will definitely be pleased!