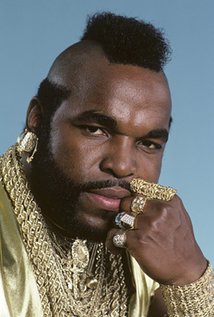 [Playboy magazine – September 1983] I am the best bodyguard, because I’ll take a bullet, I’ll take a stab wound, I’ll take a hit upside the head; I’m like a Kamikaze pilot; The President got shot because his men relaxed.

I believe in the Golden Rule – The Man with the Gold… Rules.
I pity the fool… [his trademark quote]

When I was growing up, my family was so poor we couldn’t afford to pay attention.

I pity the fool who don’t read it [the Mr T Comic]! It’s gonna be pure gold!