As a first time director of a horror feature, Julia Ducournau gets her facts straight. At the introduction of RAW at TIFF Midnight Madness, she told a full house that when she asked a fellow filmmaker about Toronto audiences, she had been told which she did repeat, to huge cheers, that Toronto has the best audience in the world.

Her film about a new graduate in a vet medical university reminds one immediately of Dario Argento’s SUSPIRA. The vet school environment is fully utilized with the blood of animals constantly splattered on the freshies, sights of bottled carcasses as well party happenings (the music track from the club is amazing!). Shy 16-year-old Justine (Garance Marillier) is following in the footsteps of her entire family when she enrols at veterinary college, where she finds herself in the shadow of her distant and dismissive older sister Alexia (Ella Rumpf ).

To make matters worse, she is thrown into the humiliating traditions of the school’s wild and vicious hazing rituals. A strict vegetarian like her parents, Justine is confronted with a moral dilemma when she must eat a raw rabbit liver as part of an initiation rite.

When she does, her tastes transform to the desire for more flesh including human ones. The film traces her roots and transformation. A neat subplot has her falling in love with a gay Arab. French FX master Olivier Afonso (who was also responsible for Midnight Madness horror favourite À L’INTERIEUR) again does marvellous work.

The paramedics had to be called during the screening. The most gruesome segment is the finger eating scene. 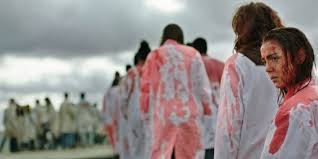