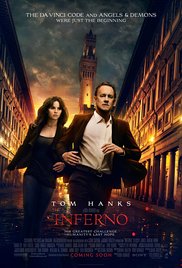 Writers: Dan Brown (based on the novel by), David Koepp (screenplay)

Warning: It is best not to see the trailer before the film as all the best and most important parts are shown, leaving the film to be a bit….boring!

In a few years time, you can argue, no one will even remember Ron Howard’s INFERNO, based on Dan Brown’s 2013 novel of the same name. It will open around the world, make a little money for the studios and talent, and then it will just disappear.

The film begins with a chase that results in the suicide of Bertrand Zobrist (Ben Foster), a transhumanist scientist who is intent on solving the world’s overpopulation problem before jumping from a bell tower. (This scene is also seen in the trailer. ) The film switches to Robert Langdon (Tom Hanks) awakening in a hospital room in Florence, Italy, with no memory of what has transpired over the last few days. He suddenly finds himself, once again, the target of a major manhunt. With the help of Dr. Sienna Brooks (Felicity Jones) and his knowledge of symbology, Langdon tries to regain his freedom and lost memories, all while solving the most intricate riddle he has ever faced.

The script by David Koepp (JURASSIC PARK) is a simple story laced with too many subplots that adds confusion. Every subplot does makes sense in the whole realm of the story, but the audience is not given much time to digest to the details.

The climatic sequence when all the characters converge to save the world (in their own way) is a total confusion of bad editing. The audience is uncertain how the virus might be or might not be released in a container that is immersed in a water system. The knife fight that involves a victorious Sienna feels like something out of a horror film where the slasher always appears for one last scare.

If there is one saving grace of the film, it is the performance of “Sidse Babett Knudsen” as Elizabeth Sinskey, head of the the World Health Organization. One of Denmark’s best actresses, she makes the most of what would otherwise be an underwritten role. Her presence gives a new definition to screen presence. “Irfan Khan” and “Omar Sy” (UNTOUCHABLES) are both not bad as the polished no-nonsense Harry Sims and Christoph Brüder, head of the SRS team respectively.

The film is shot in a few exotic locations such as Florence, Venice and Istanbul that should provide a few bright moments.

What is most puzzling is the supposedly surprise ending with Dr. Langdon and the Dante’s mask (it is already shown in the trailer so the twist isn’t really a twist!).

The link to the trailer is provided below. See it, if you must, but after watching the film, again, only if you must.