SUGAR MOUNTAIN is the location in Alaska where two brothers device a scam in order to get the money to pay off debts and have a new go on life.

Deep in debt to a local thug (upcoming actor Jason Momoa soon to be seen on AQUAMAN and JUSTICE LEAGUE), Miles (Drew Roy) persuades his girlfriend Lauren (Haley Webb) and brother Liam (Shane Coffey) to help fake a disappearance in the Alaskan wilderness around the town of SUGAR MOUNTAIN. The plan is to sell the story. But unknown to Liam, who is the main subject of the film, Miles has also other secrets that get in the way. Worst still, Liam is in love with Lauren. While the town works together to find Miles, the local chief of police, Jim Huxley (Cary Elwes) begins to suspect foul play. As he closes in on the truth, Liam struggles to conceal the hoax, and in the process exposes a secret that rocks him and Lauren to the core. Now the two are struggling to stay one step ahead of a sadistic thug and the tenacious cops before Miles is gone for good.

Performances are believable by the relatively unknown young cast. It is good to see Cary Elwes (THE PRINCESS BRIDE) nine in the role of the cop father after a long absence in films.

Being shot in Alaska, the film is expectedly gorgeous to look at. From the first scene of Miles lost in the mountains of snow to the boat (the Viking) cruising down Alaskan waters to the mountain sides where the search for Miles is carried out, cinematographer John Garrett never fails to astound. Garrett won the 2015 Emerging Cinematographer Award recipient (American Society of Cinematographers). There is also a remarkable shot scene where the couple find themselves close up to an angry bear.

The script by Abe Pogos based on a story by Pogos and Catherine Hill is interesting enough with sufficient plot twists towards the end. But the film would have world better if it was darker and more violent. One expects these elements in a film advertised a a dark thriller. But most important is the happy ending that is credible enough. The film works best when the audience is not sure what is happening on screen is part of the plan or going on for real.

SUGAR MOUNTAIN is a tough sell being a small budget movie released in the month of December in stiff competition with the big league films like ROGUE ONE, FANTASTIC BEASTS, DR. STRANGE, MOANA as well as smaller budget critical acclaimed hits like MOONLIGHT. To be fair, SUGAR MOUNTAIN is not a bad film, but it is not that remarkable a film either. But it is an earnest film, with a lot of effort put in and is a welcome change in a month where thrillers are noticeably absent. 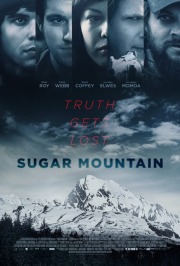