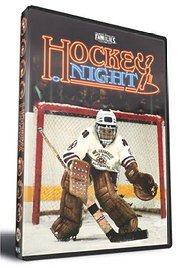 While watching HOCKEY NIGHT, which has a limited release during the Christmas week at the Roncesvalles Cinema in Toronto, I was amazed at how accurate the film captured the 80’s look from clothes, to look to atmosphere to everything.

Upon researching the film, I soon realized that HOCKEY NIGHT is a 1984 TV film. Silly me! It has been given a full 4K restoration and a special engagement run.

The film is a small budget film with mainly newcomers except for a few heavyweights like Rick Moranis (SCTV) in a serious role and Maury Chaykin (WHALE MUSIC) who lend their acting talents. The film also made Megan Follows a household name. It is a proud Canadian film, not afraid of being Canadian with familiar street and town names like Queen Street, Oshawa, North Bay thrown into the dialogue. After all, hockey is Canada’s national sport. Though a teen movie, there are no teens cussing. This is a good-hearted family film that the whole family can enjoy – particularly at Christmas.

The film begins with two stories, one centred around hockey hopeful Spear Kozak (Yannick Bisson) and the other around Cathy Yarrow (Megan Follows), newcomer to his small town, Parry Sound. For the unaware, Parry Sound is located 160 km (99 mi) south of Sudbury and 225 km (140 mi) north of Toronto. It is the seat of Parry Sound District, a popular cottage country region for Southern Ontario residents. It is also the birthplace of hockey legend, Bobby Orr, who is given a small homage in the film. It does not take a genius to guess that Spear and Cathy will form a young romantic couple. Cathy is bored to death in the town and according to her, ”fun hasn’t been invented yet in the town. ” And where there is no girl’s hockey team? Cathy was champ in her team in the Toronto. The answer now is simple: strap on her goalie pads and try out for the boy’s all-star team.

Local broadcaster Bum Johnston (Maury Chaykin) does not think a girl’s place is in a hockey arena. Chaykin injects a few quite funny moments as the prejudiced announcer at the games, giving his 2 cent worthless input. Lumber magnate Bill Moss (Henry Ramer), the team’s sponsor removes Cathy from the team with disastrous results. But Cathy stands firm between the pipes, helping the team win games while winning herself loyal allies in star player Spear and coach Willie Liepert (Moranis).

Hockey Night is a story of adolescent relationships, the struggles of small-town politics and of triumph over the expectations and pressures of the adult world. It is not a big action film with action or special effects, which is the reason this is a TV movie. The hockey matches on the ice are well shot. And like the two young hockey players. the film has its charm. This charm creates a winning film.