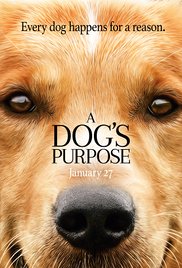 A DOG’S PURPOSE begins with the birth of a puppy. The question: “What is the purpose of life?” is asked in the voiceover. But the answer comes front he canine point of view. The puppy lives its life and dies. (The first life is really short.) It is reincarnated several times starting as a puppy leading different lives as different breeds with different owners. But the main important one is the one as Bailey (all the dogs voiced by Josh Gad) who has a loving relationship with Ethan (K.J. Apa). But the dog remembers all its past lives.

With so many reincarnations come many stories. Director Hallstrom moves his film fast, so that there is hardly a dull moment. There are 4 separate stories with 4 different owners and reincarnations. The stories are all told from the dog’s point of view. The script tries to be funny, but the result is only polite laughter judging from the promo screening audience.

The ultimate question arises from the film’s title is what a dog’s purpose is. The obvious answer is to be man best friend. But the answer (not to be released in this review) provided by the film is even more specific.

The cast has only one well known name, that of star Dennis Quaid who appears towards the end of the film, though he has an important role. The best performances are from the canine actors, credit going to the trainers of course. It is always a wonder to see how these dog players perform so well – for example running where they are supposed to go, under fences into water, jumping through loops and saving helpless human beings and licking them constantly.

The film, typical from Swede director Hallstrom (MY LIFE AS A DOG, CHOCOLAT, WHAT’S EATING GILBERT GRAPE? THE CIDER HOUSE RULES) is undeniably mawkish, milking sentiment whenever possible. It is advisable to bring plenty of Kleenex. My guest who loves dogs who I brought to the promo screening, bawled his eye out.

A few words obviously need be said about the film’s controversy. On January 18, 2017, a video surfaced on TMZ showing footage taken from the set of the film, which shows a German Shepherd named Hercules being dragged and dipped into rushing water while visibly resisting. Worst, the following clip shows the dog being submerged in the water at the other end of the tank. As a result, many is expected to boycott the film. So far, Universal Pictures has cancelled the film’s scheduled January 19 Los Angeles premiere and the representative from the Humane Association watching for the cruelty and harm to animals has been suspended. One will see during the weekend at the box-office (expected gross is $20 million) if the adage ‘all publicity is good publicity’ is still valid.

A DOG’S PURPOSE is not the best of Hallstrom’s films, but he manages a successful job. The film is an entertaining family film that caters to all dog lovers. It is pitiful that bad press arose from the TMZ videos, but the filmmakers, I am sure had the best intentions in mind for man’s best friend.