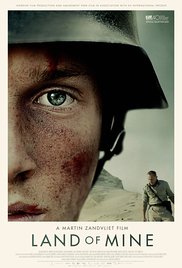 The Danish entry for this year’s Academy Award for Best Foreign Film, LAND OF MINE is a film where hate dominates, but a film in which a hidden story needs to be told. It is a film that took a while to reach screens in Toronto, having premiered two years ago at the Toronto International Film Festival. It is a difficult film to watch, but an essential one. I have seen the film three times and is my favourite choice for the Winner for Best Foreign Film after TONI ERDMANN.

The film begins with the title, May 1945, five years after the German Occupation in Denmark. A Dane sergeant, Carl Rasmussen (Roland Møller) is driving along the road while German troops are evacuating. He sights a German stealing a Danish flag and lets him have it. “You are not welcome here,” he screams. This same sergeant is responsible for 14 young German POWs with no prior training, given the dangerous task of dismantling the land mines left on the west coast of Denmark.

Based on a true but previously hidden story, Martin Zandvliet’s LAND OF MINE is a tension-filled drama about Denmark’s darkest hour when a group of German POWs – most of them young boys – were sacrificed in the aftermath of WWII. With minimal training, they must remove 45,000 land mines from the local beach, among 2.2 million that the Nazis planted along the western coast. The POWs are just boys, recruited late in the war as older able-bodied men were dwindling.

The German boys dream of going home, to get a girl, to eat decent German food. But danger lurks every second, as they can be blown up by a land mine, if they let their guard down for even a second. There are 6 blow ups in the film, but director Zandvliet is smart enough to let them occur when least expected. So be forewarned that you will be jumping out of your seat in fright too often for comfort. On my third viewing, I still jumped up twice.

Despite the prevailing hatred for the Germans by the Danes, the German boys survive – for their innocence, their youth and the triumph of the human spirit. They even save a little Danish girl who ventures on to the mined beach despite them being mistreated by the mother. Among those playing the POWs are Emil and Oskar Belton (as identical twins), Louis Hofmann (as the group’s natural leader) and Joel Basman (as a cynic who would have liked to be leader).

This is one film that will bring tears to ones eyes. It is moving film about forgiveness, tolerance, racism and finally about doing what is right. The sergeant hates the Germans, mistreats the German boys under his command initially. After seeing them blown up by the mines, mistreated by the other Danes and mostly seeing them innocent as young boys caught in a world beyond their control, even though they are German, Rasmussen finally decide to side with the boys.

I watched an interview on director Zandvliet on TV two years ago. He says that his film is based on a story that has to be told. He also expressed his concern for the Syrian refugees and how governments should be more sympathetic to let these refugees in. This is one man who is dedicated for doing right for the human race. His awesome film LAND OF MINE demonstrates his conviction. I highly recommend this film, a great watch even after a third viewing.