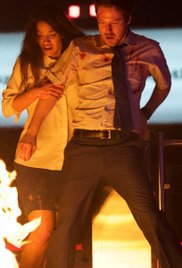 In a twisted social experiment, 80 Americans are locked in their high-rise corporate office in Bogotá, Colombia and ordered by an unknown voice coming from the company’s intercom system to participate in a deadly game of kill or be killed.
.
Director: Greg McLean
Writer: James Gunn
Stars: John Gallagher Jr., Tony Goldwyn, Adria Arjona

Office politics turns into a real-life survival of the fittest when workers at Belko Company are forced into a sick game of kill or be killed by unknown sinister forces (revealed at the end of the film) that lock down their building, in this gruesomely funny horror thriller. It at first seems to be an ordinary morning on the job for a group of Americans working for a not-for-profit company in a modern office building in Colombia. After noticing that their Colombian colleagues have not arrived for work, office worker Mike (John Gallagher, Jr.) spots some unfamiliar security guards entering a large hangar nearby. Moments later, an icy voice comes over the building’s PA system and calmly explains that the employees must kill 2 other employers of their choice within 30 minutes — if not, they will be killed themselves. While the boss (Tony Goldwyn) tries to calm the troops, Mike belatedly realizes that something truly sinister is going on — and when metal doors come sliding down on all the building’s exits and windows, it becomes clear that friends and colleagues are now suddenly enemies in a bloody and brutal battle to the death.

Even before the action begins, McLean delivers lots of inside office jokes like the isolation of working in a cubicle, sexual harassment and the introduction of new employees. The film contains a good cross-section of workers like the maintenance men, the security, the bitchy lady manager et al. The film is a mix between disaster, sci-fi, horror and comedy which means that the filmmakers have plenty to play around with. In the kill to survive scenario, there is the good guy with all the right motives, the bad boss (handsome Goldwyn doing the villain as he did in GHOST), the unstable psycho, the asshole, the plump good meaning lady and so on.

The music, by Tyler Bates (GUARDIANS OF THE GALAXY VOL.2), is an assembly of musical numbers from classical Tchaikovsky to a Latino version of “I Will Survive” effectively used at appropriate intervals. The sounds effects are superb especially the metal closing of the windows and doors.

Besides being a well-made horror thriller, McLean also squeezes in office satire and a fews good metaphors like the segment of the dos shitting and covering up its shit outside the Belko compound. There are a few predictable parts – like the one involving the office pervert/asshole sexually harassing the pretty employee. His comeuppance, with his life at her mercy comes as no surprise but provides the biggest cheer of the movie.

Best of all, the ending is unexpected, also providing a good twist to the story. THE BELKO EXPERIMENT proves to be very violent and satisfactory fun, if one can stomach the graphic violence.