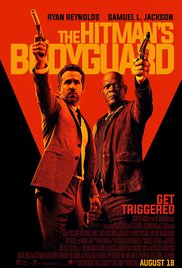 The world’s top bodyguard gets a new client, a hit man who must testify at the International Court of Justice. They must put their differences aside and work together to make it to the trial on time.

Actor Samuel L. Jackson is one bad ass mother f***er. When ever he appears in a film, even when playing the President of the United States, he has never failed to use his favourite catch phrase ‘mother f***er’, which he gets to use multiple times in this movie. Jackson is one of my favourite actors in films currently as he can always be counted on to deliver a solid, spirited performance, no matter what. In THE HITMAN’S BODYGUARD, he also gets to utter the film’s best joke: “If life deals you shit, you go out and make kool-aid.” to which Ryan Reynolds remarks: “That is not how the saying goes.” Jackson also gets a lot of laughs doing his HOME ALONE expression. Another good joke (though this one belongs to Reynolds) is the one regarding the pen-knife. But the best thing in the film, is a segment where the two leads discuss the usage of the ‘mother f***er’ phrase. Priceless!

The story involves a bodyguard, Michael Bryce (Reynolds) assigned to keep a previous Hitman, Darius Kincaid (Jackson) alive so that he can be transported to Hague, to testify against a corrupt Russian warlord Vladislav Dukhovich (Gary Oldman). The film plays the two against each other. The chemistry works, the laughs come fast and furious and the action segments are expertly executed.

The climax of the film includes a spectacular car chase that appear to take on the recent BABY DRIVER. Jackson takes off in a speedboat on the canals around Amsterdam pursued by the bad guys speeding on the streets around the canals. The sequence is well shot with good continuity that also includes another boat contains merrymakers split right into two. The camp factor is increased several notches with screaming prostitutes running around the streets. There is also n funny window-eye view of the chase as if seen by one of them through the glass.

As if this was not exciting enough, the car/boat chase is intercut with a foot case with Reynolds under pursuit. The two chases are brilliantly brought together with the fire of an exploding vehicle from which the camera pulls back now only to show the fire now from the grill in the kitchen in a restaurant which Reynolds breaks into.

Though the script is occasionally lazily written, with details left out, for example why Jackson landed in a Manchester prison, the jokes and punch lines are perfectly timed.
The camera placement is also excellent throughout the film, often with images to show Jackson’s expressions through the car front window or to see Reynolds somersault through the front windscreen to land standing up in front of the car after.

The main plus of THE HITMAN’S BODYGUARD is that the absolute unexpected can and actually always occurs at any time. The two for example, end up at one point, hitching a ride in a van full of nuns with Jackson joining them in a singalong.
The film’s speed and spirit matches its message on life, that things happen but you got to do your ‘thang’. They just do not make enough films like this one.