The story of an encounter between a bourgeois man and a poor woman, because their teenage sons get engaged.

LIKE A CAT ON THE HIGHWAY refers to the length of time a teen like the protagonist’s son’s romantic relationship will last.  The film begins like an Italian version of BLOCKERS.

The father, Giovanni (Antonio Albanese) trails his daughter as she meets up with her new tattooed boyfriend.  The trail leads him to a poor rough area where his windshield is smashed by a woman with a baseball bat.  Following him to the apartment, he finds that the girl’s mother, Monica (Paola Cortellesi) is the one who smashed his windscreen.  Things take a turn when they end up all going for a picnic together on skull island, a very poor man’s beach.

It is the same old story where a privileged rich man meets a poor rough lady and they both end up learning about life and each other.  Still, despite treading on familiar territory, Milani’s film has its charms, thanks to the two wonderful leads.  The jokes come off quite hilariously, the segment with the bored Monica and Gio watching a foreign film in an art-house cinema being the funniest.  Milani fortunately holds off any romance with only a hint of it at the very end.

Three women unite out of their frustration over men. They pledge to each other that they should each learn to love themselves before they become romantically involved with anyone again.

Half Magic is the directorial debut of Heather Graham. While the actress has starred in several mainstream and indie flicks, this is the first project where she serves as part of the creative team. According to Hollywood Reporter, the comedy film follows Honey (Graham’s character), along with two of her friends, as they make a pact to each find great sex and a good man, preferably from the same person.

Starring in a comedy is not particularly new to Graham, whose recent projects include the indie films “Wetlands” and “Last Rampage” and an advertising campaign for the hugely popular British gaming community Foxy Bingo. In fact, it has somewhat become her brand over the years. The Huffington Post said that the actress, who has consistently ranked as among the most beautiful faces in Hollywood, used her looks to her advantage and managed to make a career off the back of it. Writing the script and directing Half Magic, however, proves that she is more than just another pretty face in the industry.

Graham confessed to the People that the urge to write the script came after she broke up with someone. She purposely made her writing funny to help her get over the relationship, and incorporated some of her own, as well as her friends’, life experiences in the story. Although, it’s worth noting that they were exaggerated for comedic value.

But beyond the humor of the film and the catharsis it gave her post-breakup, Graham admitted in an interview with Digital Spy that she wrote the film as a way to address sexism in Hollywood. The actress explained, “It’s hard – you want to make a movie about how some of the entertainment industry is sexist, and then you’re like, ‘Why doesn’t everyone want to make this movie?’”

In another interview, Graham mentioned the reason why she pushed to turn her script into a full-fledged movie. She realized that instead of waiting for the dream role to come to her, she would just create that dream role herself. While she was quick to say that she’s thankful for her projects throughout her career, she wished there were more movies made that told things from a feminine point-of-view. The thespian commented that Hollywood’s tendency is to present things from the male perspective. She actually stated in several interviews in the past that her reason for taking on raunchy roles was to help open discussions on female sexuality.

In fact, her character in the film is a tongue-and-cheek parody of what she experienced in her career. She relayed that Honey works for a man who told her that the content she produced will never get picked up because it was written from a woman’s perspective. And the only way to have her story made was if she instead told things from a man’s point-of-view.

The release date of Half Magic is yet to be announced. 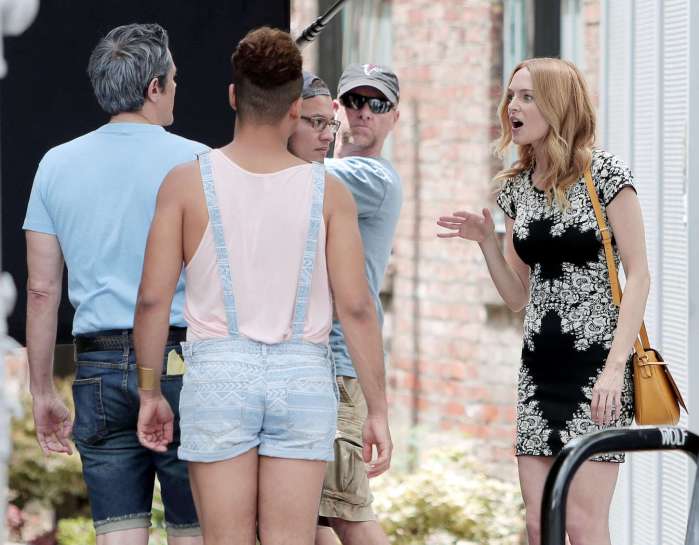 The final Marx Brothers movie was Love Happy (1949). At least it was the final movie for the three Marx Brothers to appear together. In 1957 they all appeared in separate segments of The Story of Mankind. Actually, for a good part of Love Happy, only Harpo and Chico appear. Groucho is nowhere to be seen, which really takes away from this movie.

In order to pay off more of Chico’s gambling debts the Marx Brothers were forced to make this last movie. For the rest of his life, Chico’s gambling debts would have to be paid off by either Groucho or Harpo or Zeppo, who became rich as an agent after leaving the Marx Brothers act. Although money was the main reason why the Marx Brothers decided to make another movie, getting funding was not so easy. In fact, there was so much trouble getting funding that the end had to be changed to accommodate some product placement advertising from the firms that were paying for the movie.

If you are a fan of Harpo Marx then this movie should appeal greatly to you. Harpo wrote the story and is the main character. In a familiar routine, Harpo begins the movie by stealing something. This time it is food. He ends up stealing a can of sardines that contains priceless diamonds. Being the great guy Harpo is; he was not stealing the food for himself, but for a group of struggling theatre performers.

The theatre company is in such dire straits that the show’s backer is threatening to close the group’s play before it can be taken to the stage. He wants to reposes some of the scenery used for the play, but is foiled in his attempt by Faustino the Great, a mind reader who is looking for a job. Of course Faustino is played by Chico and because Chico is able to foil the plot, the grateful director allows him to remain as part of the crew.

With Harpo stealing the diamonds a $1,000 reward is put out for his capture. Harpo is captured and taken to the apartment where they bad guys attempt to interrogate him. Although it seems like an obvious comedic situation to use with Harpo, this is the first time that he is put in a situation where people try and make him talk. Typically it is Chico who tries to get Harpo to talk, and he knows that Harpo doesn’t talk, but here the bad guys have no idea Harpo can’t talk so there is some good comedy in them trying to use interrogation techniques while trying to make Harpo speak. Of course they can’t. They get too tired and when they leave, Harpo telephones Chico, who is able to understand him when he communicates through a bike horn.

Apparently the can of sardines that contain the diamonds was left outside of the theatre for a cat to eat. Harpo finds the sardine can when he arrives back at the theatre. Amazed at what he has found, Harpo pockets the diamonds.

The bad guys have tried to get the diamonds back themselves, but have failed. So they decide to enlist the help of a private detective, this is where we are formally introduced to Groucho. The movie actually starts with Groucho saying that he has been trying to find these diamonds for many years and the story we are about to see is how he was able to finally get them. This is all very nice, but the scene in which the bad guys threaten to kill Groucho in an hour if he does not get the diamonds back before them is notable for the first appearance of a future screen legend – Marilyn Monroe.

In a walk-on role, Marilyn Monroe was cast as a client that comes to see Groucho’s character just after the bad guys arrive. Groucho is so thankful that someone has opened his door to let him out that he runs and leaves, but when he sees that Marilyn Monroe is the girl who opens the door he immediately comes back in where the bad guys are and tries to seduce the young screen legend.

The introduction of Marilyn Monroe and Harpo’s interrogation scenes are basically all that are worth mentioning in the movie. The rest is Groucho and the bad guys chasing Harpo around the roof tops of New York while billboards and lighted advertisements, put up by the movie’s financers, clutter the screen.

Today, Love Happy is billed as a teaming of Marilyn Monroe and the Marx Brothers in order to get people to watch the movie. Don’t be fooled though. Neither one is at the top of their powers. The Marx Brothers were doing this for money and Marilyn Monroe did not know how to use what she was given yet. Perhaps in another time or place this team would have worked out well. The possibilities sure could have been endless, but so could’ve the teaming up of Lucille Ball with the Marx Brothers in Room Service and that was also a dud.

The bottom line is, don’t watch Love Happy unless you are a huge fan of Harpo.