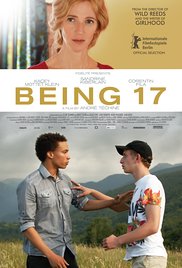 Directed by Téchiné with a script he wrote in collaboration with Céline Sciamma, the film follows the romantic and sexual awakening of two seventeen year old boys as their initial animosity, expressed in violence, morphs into love. For the not-so French literate, Being 17 borrows its title from the second half-line of the first verse of Roman, (1870) by Arthur Rimbaud: On n’est pas sérieux quand on a dix-sept ans.

This is not their first collaboration. Téchiné and Sciamma have worked on several films before including the quite similar and excellent LES ROSEAUX SAUVAGES (WILD REEDS) in 1994 also about young gay love.

The film unfolds in 3 trimesters (three French school terms in a year). The first occurs in winter and the final after summer. The protagonist is 17-year old Damien, a smart (good in math) and sensitive (good in poetry) who lives with his doctor mother and absent father, Nathan a fighter pilot abroad. They lead a relatively comfortable life in a small town located in a valley among the mountains of the Hautes-Pyrénées. Mother and son miss Nathan who comes home occasionally when the military allows.

In high school, Damien gets picked on by Thomas, a classmate, who trips him in the middle of class for no apparent reason. From then on there are constant altercations between them while playing sports and in the schoolyard. Both are outsiders at school chosen last for sports teams. In order to protect himself, Damien takes self-defense classes with Paulo, an ex-military family friend. The film goes from there with the story turning into young love – with raging hormones expected of youth at the age of 17.

The main story is supported by significantly moving subplots about Thomas’ adoptive mother bearing a child and Damien’s father’s death, the catastrophe that eventually brings the two boys together.

The change of seasons reflect the sexual awakening of the boys. When the boys are in school the first trimester is set in winter, their sexual desires are as if, hidden in the cold. As spring approaches, Damien’s sexual attraction towards Thomas awakens. An excellent segment also occurs later in the film when the two study Latin and discuss the difference between desire and need. Desire is natural but superfluous and pretentious, the reason Thomas tripped Damien in the classroom as he deemed Damien’s poem as open pretentiousness.

The shooting of the film in the winter in the mountains of the Hautes-Pyrénées makes stunning scenery. And the sight of the small town from the mountain top, as shown by Thomas to Damien’s mother is breathtaking.

For a director over 70, Téchiné captures the vibrance of youth. This can be observed best in the scenes in Damien’s school as the kids goof around, take part in sports or take lessons in the classroom. It is also rare in films that both adults and youth are treated as intelligent. In fact, every character is intelligent enough to have a valid say in the story. BEING 17 is both a moving and enlightening entertainment that marks once again another superior work from Téchiné.