Picking up where the original Nightmare left off, Nancy has grown up and become a psychiatrist specializing in dream therapy. She meets a group of children at a local hospital facing Freddy Krueger, the same demon she once encountered in her sleep. One of them is Kristen, who has the power to draw other people into her dreams. Working with a male doctor assigned to the case, Nancy helps the kids realize their special abilities within the nightmare world. When Freddy captures one of her charges, she leads a rescue attempt into Krueger’s domain, in hopes of putting his spirit to rest once and for all.

Having been a fan of the Elm Street movies since I was about seven, Part 3 is the best interpretation of Wes Craven’s vision outside of the first Freddy movie. It has both the power to terrify and shock you, with a touch of comedy used which I’m sure was intentional by its director Chuck Russell.

Kristen (Arquette) is having some bad dreams. Believing that she is going insane due to her staying up late at night, Kristen is sent to a psychiatric ward where she is overlooked by the kindly Dr Neil Gordon. It is not long after Kristen arrives that Dr Gordon is joined by an up-and-coming staff member named Nancy Thompson (Langenkamp). Having survived Freddy’s (Englund) attempts on her life in the first movie, she is as much as an expert on what to do with Krueger and his evil ways.

Not long after first arriving, Nancy notices that the other patients are suffering from the same problem which Kristen has. Will she ever be able to help her? Or will they suffer as Nancy’s friends did all those years ago?

With a great cast, this movie is a fine interpretation of how a sequel should be. Wes Craven, who did not return for the first sequel, wrote the story for this and you can see his creepy influence here. This is a movie made before CGI, and what you see happening pretty much occurred in reality and not on a computer screen. There are times when you are deeply impressed by what occurs in front of you, such as the head of Freddy trying to eat Kristen to a ventriloquist’s dummy changing into Freddy and cutting some poor soul to pieces. In all, it’s a very decent looking slasher movie.

As with all films, it is content over style and this film is that. The script throughout is solid, as are the performances. Admittedly not a huge fan of Arquette, this was her second film and shows true acting ability that previous star’s of this franchise have not shown.

As with all slasher franchises, a heroine has to emerge and in this movie that is Nancy. Someone who can defeat the lead character when all around her cannot, she returns here once more and her main objective is to destroy Freddy in both the conscious and subconscious world. Her caring nature does not become hindered at any one time, and you honestly and truly believe in her quest to rid the world of Freddy.

And what of Englund as the child killer? Marvellous and over the top as usual. Although he may be a classically trained actor who has worked in the theatre since the end of the Freddy movies I believe he relished his portrayal of the psychopath as he had the opportunity to let rip, so to speak.

I shall always watch movies like this. Yes I admit to loving the work of Bergmann, Truffaut and Eisenstein but there just seems to be something about the Elm Street movies which make them totally endearing and fantastic to watch. 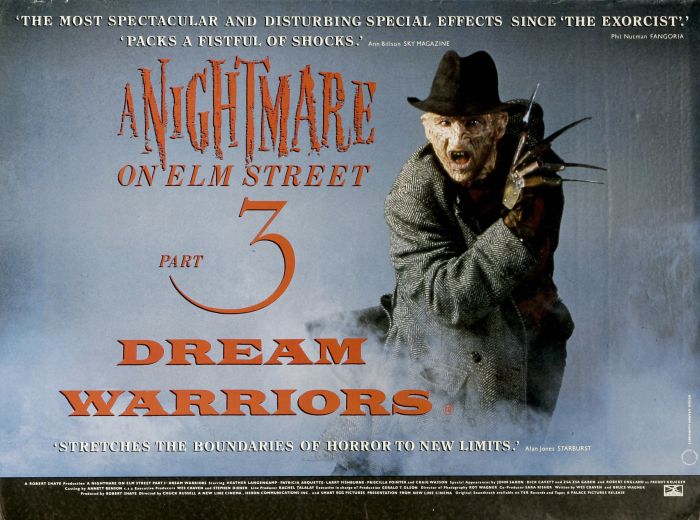