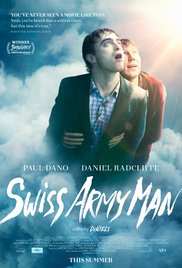 A hopeless man stranded on a deserted island befriends a dead body and together they go on a surreal journey to get home.

This issue of Gems You May Have Missed is all about unlikely heroes, psychological breakdowns and dead bodies with magical boners. Yes. I said that.

SWISS ARMY MAN is a rare beast of a film. Written and directed by Daniel Kwan and Daniel Scheinert, and released in early July 2016, this piece requires commitment to your distension of disbelief. But if you can jump that hurdle, the film pays off big in the realm of emotional dividends and offbeat humor. Really offbeat.

Hank (Paul Dano), a nondescript everyman with a healthy dose of melancholia acts as our unlikely hero, when we find him at the opening of the film, stranded and starving on a desert island. He is about to hang himself when Manny (Daniel Radcliff) washes up on shore. Desperate for human contact of any kind, Hank forms an emotional and slightly creepy attachment to our dead friend. Believing that the appearance of Manny must be a sign, Hank drags the corpse off the beach and begins the long trek to seeks help and a way home.

The film starts on a dark note but quickly spirals through dark comedy and into a strange, but loveable hybrid of genre all its own, when Radcliff’s character Manny begins to talk. Not only talk, but also perform life saving tricks for Hank- like gush fresh water from his mouth, use his erection as a north-pointing compass, and, wait for it, fart so powerfully that he can work as a human motor boat. Hank and Manny form a bizarre bond of friendship, compassion and an utterly fresh take on instrumental friendship, as they must work together to get back to civilization.

It is hard to explain what makes SWISS ARMY MAN such an incredible cinematic experience. It boasts gorgeous, lush cinematic visuals, beautiful art direction and breathtaking cinematography. It is also largely a two-hander which means huge applause must go out to both Dano and Radcliff for engaging and grabbing performances. While both actors do a fantastic job in their roles, a special nod must be given to Radcliff who, has the added challenge of conveying a depth of character while still managing to pull of character that is, well, dead. The script is quirky, emotional and vibrantly original. But what makes SWISS ARMY MAN a real gem, is how startling unique it is. There is simply no film quite like it.

A viewer can watch this movie and feel a vast array of feelings- confusion, absurdity, hilarity, sorrow, compassion, concern and disbelief all within an hour and half. We never really know if we are watching a metaphor, one man’s delusion, or a strange world where anything-can-happen. But we feel something. The feeling may be complex and confusing but it is undeniably authentic. You may need to let go of logic and reason and strap yourself in for this roller-coaster of a film, but it is worth every minute of the ride.