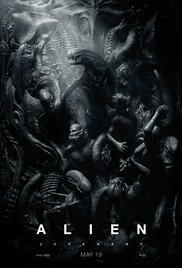 The crew of a colony ship, bound for a remote planet, discover an uncharted paradise with a threat beyond their imagination, and must attempt a harrowing escape.

ALIEN helmer Ridley Scott (he directed two of the series) proves that at the age of 80, he still has it. The latest ALIEN called ALIEN: COVENANT the second of the prequel before the first ALIEN movie and the sequel to the last PROMETHEUS shows Scott in top form. ALIEN COVENANT is far superior to copycat space horror films like the recent LIFE and PASSENGER. ALIEN: COVENANT is the real thing – with real horrors in the abyss of space that will keep one at the edge of the seat watching face clingers and torso busters (called more mildly face huggers and chest bursters in the film).

The film begins with a short flashback showing Peter Weyland (Guy Pearce) while he is still alive; he addresses a synthetic android (Michael Fassbender) who would become part of the Prometheus expedition. Weyland asks the android to select a name for himself and the android selects ‘David’ as his preferred name.

The film moves to the present which is 2104. The crew of the colony ship Covenant is bound for a remote planet with two thousand colonists and a thousand embryos aboard. While en route to their destination, an energy surge damages the ship, killing its captain and waking the crew. As they repair the ship, the crew intercept a radio transmission from a nearby planet and decide to investigate as the transmission is human in origin but the planet is supposedly lifeless. This is when the horror begins.

The first ALIEN film was panned by the critics with the critic at Time Magazine calling it a bastard movie, a cross between STAR WARS and JAWS. One can see why. Like JAWS, the first sight of the alien occurs almost a third into the movie just as the first sight of the shark was never seen till half of the film elapsed – a Hitchcock trait (best example: THE BIRDS). But once the monsters starts bursting out of the victim’s bodies – watch out ! Sound effects, special effects and all the horror instruments filmmakers use are perfectly combined to scare the hell out of audiences and for a fairly lengthy interval of time at that. PASSENGER never achieved that level of effect while LIFE imitated a few of the scares. The alien clinging on the outside of the spaceship as it strives to enter the ship, is seen in both LIFE and COVENANT. There are more characters in COVENANT than in any of the past ALIEN Films or in LIFE and PASSENGER resulting in more grisly deaths as well.

COVENANT is neatly tied in to PROMETHEUS though the audience need not know much about the original film. The film also contains an intricate enough plot, with a sufficient twist at the end, brilliant for the fact that the audience is supposed to guess it.

The only complaint is of the film being a bit confusing, though the confusion can be sorted out with a bit of reflection. One is the use of actor Fassbender to play the two androids David and Walter. The other is the flashback at the start of the film, which is not clearly conveyed to the audience as a flashback. When Fassbender appears on the ship, one assumes he is David, but he is actually Walter. Another disarray arises with the large number of crew suddenly descending on the planet as the film only showed a handful of humans awakened from their slumber.

Scott still uses the gimmicks of the past ALIEN films to ensure the film’s success. Katherine Waterston as Daniels, a terraforming expert looks like a younger Sigourney Weaver, especially in her sweat-soaked undergarments. The sight of the alien eggs before hatching still looks as eerie as before. A few new additions are added like the bath scene (looking almost pornographic) which is comical in a way as the alien strikes like a snake-like creature.

ALIEN: COVENANT returns the franchise to its roots and to what works. Fans and audiences would shriek in delight!