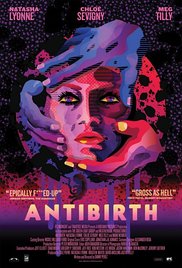 As nasty pictures go, ANTIBIRTH is one hell of a nasty piece. Halfway throughout the film, the lead character, Lou (Natasha Lyonne) remarks: “I am not pregnant. I am infected!” But writer/director Danny Perez infuses an accurate stoner humour into the proceedings. Unlike films like SAW and HOSTEL, which are nasty beyond watchable, ANTIBIRTH is very watchable and entertaining in a nasty way. In the words of director Perez, “I wanted to show the other side of pregnancy besides the feel-good and the glow; i.e. the more gruesome aspects of pregnancy and what it does to the body.” He ties the film with UFO Youtube conspiracy theories, which does not always work. Needless to say, the film should be avoided by any woman in the expectancy period.

In a small Michigan town, hard-partying stoner Lou (Lyonne) awakens one morning and finds herself experiencing bizarre symptoms. Her friend, Sadie (Oscar nominee Chloë Sevigny from BOYS DON’T CRY) believes she is pregnant and not telling her about it, despite Lou’s claims that she has not had sex with anyone in nearly a year. A mysterious stranger, Lorna (Meg Tilly), however, believes Lou. As conspiracies and stories of bizarre kidnappings around town begin to spread, Lou’s visions and grip on reality become more distorted.

Perez wrote his film with lead actress Lyonne in mind. It shows! Lyonne is perfect for the part as the stoner do-not-want-to-be-mother. “I cannot be pregnant. It is not my style.” She says. Her character, Lou smokes from a bong with the mouthpiece so large that it fits her entire mouth. She survives on donuts and cigarettes. Meg Tilly, not seen for a while on screen returns in a role as a frumpy weirdo who sees flashes of light and visions, like someone switching on and off a TV channel.

Be warned that Perez is fond of including very gross scenes. One has Lou peeling off a scar tissue at the back of her neck before extracting one of her molars with her fingers, blood and all. But the best (grossest) scene has her using a knife to break open a huge blister on the sole of one foot, followed by all the blood and pus running out. She then wobbles around with a cane, limping around until she delivers. One can appreciate if not feel her pain during the pregnancy – or infection, if one wants to call it that.

The winter setting with the ice and snow as well as the dirty mud aids in the film’s gloomy atmosphere. Her trailer home looks even more dismal in the wintry setting.
The best scene? Meg Tilly’s face covered in blood smiling after delivery of the monster baby remarking: “Oh my goodness!”

ANTIBIRTH works as a horror film with major stoner attitude. One of the best horror films of the year! See it with caution!