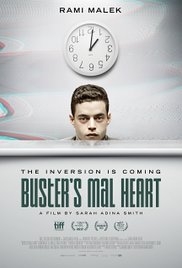 A family man’s chance encounter with a conspiracy-obsessed drifter leaves him on the run from the police and an impending event known as The Inversion.

If quirky films are your cup of tea, writer/director Sarah Adina Smith’s (MIDNIGHT SWIM) BUSTER’S MAL HEART has much to offer. The title is even strange – a mix between Spanish and English which translates to Buster’s Bad Heart because the film’s protagonist is Latino and that he is discovered to have a bad heart in the later part of the film.

The film is occasionally as confusing as the film is quirky, primarily because Smith does not take the route of a straight narrative. Her film opens with a troubled man sporting a full beard growth looking like a mountain hillbilly, nicknamed Buster by the media (Mr. Robot’s Rami Malek) on the run in the wilderness, hunted down by the local police. The film flashbacks to 5 days prior to explain the incidents leading to the state of affairs. But the film quickly jumps back in time to the present, so that the 5 days prior does not hold for more than 5 minutes or so. If one can forgive the confusion, Smith’s film is as intriguing as it is absorbing. Be forewarned that this is a mindf*** film, so be prepared for an open ending.

Buster is on the run from the authorities, surviving the winter by breaking into empty vacation homes in a remote community. Regularly calling into radio talk shows — where he has acquired the nickname “Buster” — to rant about the impending dangers of Y2K, he is haunted by visions of being lost at sea, and memories of his former life as a family man.

Smith also intercuts her film with Buster (Rami Malek) who was once Jonah, a hard-working husband and father whose job as the night-shift concierge at a hotel took its toll on his mood and, consequently, his marriage to the sensitive and long-suffering Marty (Kate Lyn Sheil).

Things are going well work and family-wise, until a chance encounter with a conspiracy-obsessed drifter (DJ Qualls) changes the course of his life forever. The drifter warns of Y2K and how he will benefit from the disaster. The audience already knows the nonsense from the false prophets as Y2K has passed with nothing happening with all it false prophets put to ridicule. But the drifter warns of an earth’s inversion. This is shown as inverted numbers as in clocks in hotel room numbers.

Smith’s film is full of polar opposites. Buster is at one point a family man and hotel clerk, neat, well-groomed and handsome. In the other, he is unkempt, bearded, untidy and ghastly. Butler can also be quiet, calm and calculated while angry and loud, screaming at the top of his voice in another scene. Actor Rami Malek is excellent in his role of Buster, able to convey different personalities. DJ Qualls is also impressive as the talkative drifter. 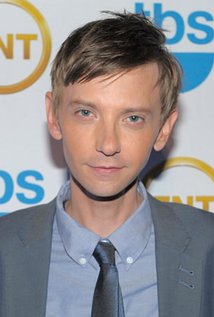 You know, so many people say TV makes you stupid. But it had the complete opposite effect on me. It kept me from having a really bad Southern accent.

The idea of sitting in a booth, and having someone pay me to sign autographs, seems so gross to me.

My face is distinct. It’s hard to confuse me with anyone else.
I’ve lived so frugally for so long. I have to have that financial security or the world feels out of control for me.

I have been to Graceland a hundred times. Every kid in middle Tennessee has this night where it hits midnight, and they are like, ‘Let’s go to Graceland!’ It’s a rite of passage. I did it.

I grew up in a town with no movie theater. TV was my only link to the outside world. Film wasn’t such a big deal to me. It was TV. So much so, that when I meet TV stars now… Not my co-workers, but real TV stars, I get nervous. I freak out around them.

I grew up in a rural area. I grew up in deep southern middle Tennessee, probably about thirty miles from the Alabama border. There’s nothing there, really. And the TV was my link to the outside world. It’s what kept me from going into factory employment. It’s what made me want to go to college. It was really inspiring.