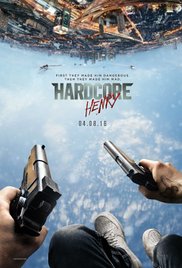 Ilya Naishuller’s HARDCORE HENRY, produced by Timur Bekmambetov, best known as the director of the Russian action sci-fi big production NIGHT WATCH trilogy moves along with the same pace as Timur’s films, and like them, boredom sets in pretty fast. In HARDCORE HENRY, the novelty of the gimmick film begins to wane after 15 minutes or so.

But still credit should be given to wunderkind music video wiz director Ilya Naishuller for his ingenuity and hard work in keeping his film consistent. And it is difficult work, undoubtedly.

HARDCORE HENRY is shot form the point of view of the protagonist, Hardcore Henry a half man half machine, resurrected from the dead by his British wife (Haley Bennett) for whatever reason that is never made clear, just as it is not made clear why the spouse is a Brit.

The camera acts as if placed in his eyes and as Henry moves around fighting punks, a dozen a minute, as the audience gets to see the beaten up victims, thrown around. The audience also gets to see Henry’s legs and arms and what the man would see. If Henry scales a wall, the audience has Henry’s point of view doing it. Unfortunately, because of the mishap of the past, Henry is unable to speak at the start. Also, Henry is at odds as what is gong on, and why everyone is trying to kill him, led athirst by a guy called Akan (Danila Kozlovsky). Also, a weird guy called Jimmy (Shalto Copley) keeps appearing at odd times, trying to help, or is he?

HARDCORE HENRY does have a good start though. The audience experiences Henry as his arms and legs are screwed on to him, just as he is voice activated by his wife. Suddenly the lab or hospital as the case may be is stormed by Akan. Henry and his wife are propelled out in some space module from a spaceship of some sort. It all works so amazingly, but only till then. It is 15 minutes into the movie.

One big problem of the film is the audience kept in the dark just as much as Henry is. Naishuller make no qualms that action in his film with his camera techniques are his priorities. It is therefore frustrating right up to the very end of the film where nothing is yet explained. Naishuller teases the audience too much, especially with the Jimmy character.

HARDCORE HENRY surprisingly won the Toronto International Film Festival Midnight Madness Public Award for Best Film. Obviously, Naishuller’s film caters to a different crowd than to me, as well as I would think to most critics. The film feels like a video game and it would be assumed more suitable for audiences favouring that vocation.

There must have been a reason films have never been made before from the protagonist’s point of view as in HARDCORE HENRY. A close cousin to this film would be the found footage films with shaky camera that can also be terribly annoying films to watch. The latter has taken a form of success in low budget horror films and this tactic may take off in low budget action film.